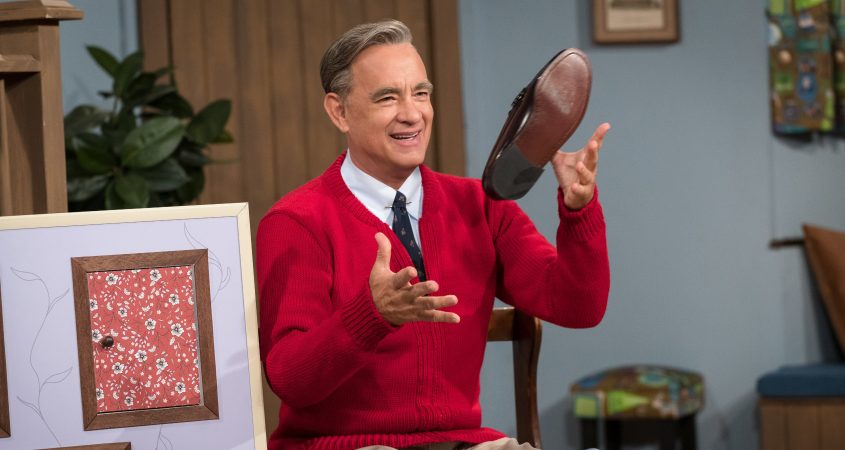 For some three and a half decades, Fred Rogers was the host of a daily children’s television programme, “Mr Rogers’s Neighbourhood”.  Fred used the show to help the children of the United States develop in humility, kindness, and emotional maturity through his presentation of everyday events and encounters and reflections on them.  Beloved by several generations who grew up having absorbed something of his innate goodness, Rogers lived the very kindness, forbearance, and neighbourly thoughtfulness that — in not so many words — he espoused to his young audiences.

In A Beautiful Day in the Neighbourhood, Lloyd Vogel (Matthew Rhys), an investigative reporter with a chip on his shoulder due to unresolved anger toward his absent father (Chris Cooper), receives an assignment beyond his comfort zone: to interview Fred Rogers (Tom Hanks) and write a brief profile on the man.  But Vogel suspects that Rogers may not be the hero everybody believes him to be.

The film shows the very conscious efforts that Fred Rogers makes to bring joy and wholeness to the lives he touches.  We never quite learn what it is that Fred’s efforts toward positivity have overcome in his own life, though he certainly hints that there was something significant.

Tom Hanks was an inspired choice for the role of Rogers, and in fact conveys the considerate, deliberate Rogers character as though born to it, and his face naturally expresses the kindness that is Rogers’s trademark.  More remarkable still is the perfection of Hanks’s capture of Rogers’s television mannerisms, right down to the exact way he zips his cardigan and changes his shoes.

Even so, Rogers’s inner character remains essentially mysterious, as the tale almost entirely takes Vogel’s viewpoint.  And in the film’s climactic moments, even that viewpoint takes on the surreality of dreams, as Vogel involuntary takes a different perspective on his own character while unconscious.  The progressive development of Vogel’s character and of the relationship between him and Rogers leads to a very satisfying conclusion, one sure to lift anyone’s spirits.  The film makes for a lively and funny but unusually calm entertainment for all ages.