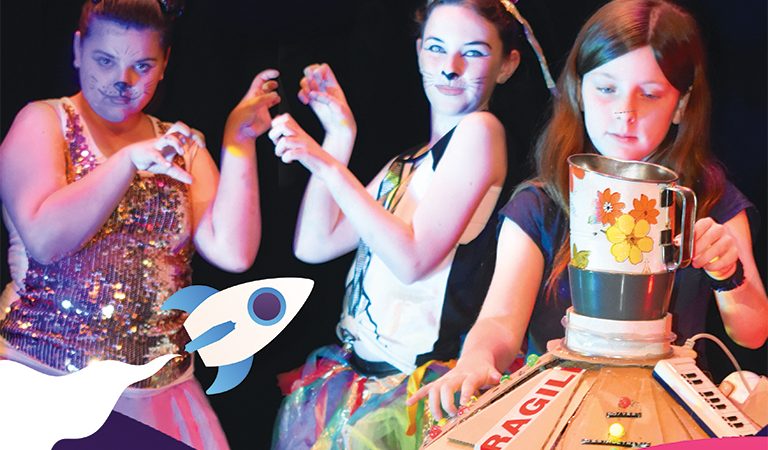 For the last six months, a group of children aged 6-13 have been diligently training at Tuggeranong Arts Centre (TAC), meticulously constructing their own rocket-like musical.

Working with facilitators Tim and Nathalie Bevitt, as well as choreographer Caroline Wall and artist Tom Buckland, the children have written and produced an hour-long musical entitled Mission: H2O and are now ready to launch their debut performances.

Mission: H2O is set in Space School 11 where all is well until suddenly tragedy strikes when the students discover… That all the bubblers are broken!!!

The musical’s plot was developed in response to a prompt from the TAC team to think about water management and environmental sustainability. I mean, someone bloody well has to, amarite?

“As we have seen from the recent Schools Climate Strikes, our children are increasingly aware of the environmental challenges we are facing. With this project, we wanted to provide a place for young people to explore these ideas in a creative way and give them an artistic platform to express their ideas.”

Tim Bevitt says he and co-facilitator Nathalie have seen this first hand:

“The children have totally embraced the subject of water issues. They are looking at the issues of water shortage in Australia and the causes of this in our country and around the world, as well as climate change and the human environmental impact. They know that all these problems are there and the musical we have written together is actually using art to address and inspire people to act.

“For us as facilitators, it is a privilege to open an artistic platform for them to voice their concerns and their hopes in a safe and playful environment,” he adds.

And the message from the children is clear in the show’s lyrics, with lines such as:

“You know the grass is far, far greener where there’s water/So let’s fix our mistakes, no matter what it takes.”

Of course, these issues are not limited to Canberra, and an important part of the project has been a new collaboration with Goulburn’s Lieder Theatre.

In July, the project kicked off with a one-day collaboration between the Tuggeranong participants, young people from the Lieder Youth Theatre, and a group of schoolchildren from Kathmandu in Nepal. And following its debut season in the TAC Theatre in November, Mission: H2O will tour to Goulburn in late January with actors from Lieder Youth Theatre adding to the cast.

“We’re excited about this new regional collaboration,” Rauny Worm says. “It is a great chance for our participants, who are living in suburbia, to engage with young people living in regional areas, which are really at the forefront of these environmental changes. And it’s also a fantastic artistic development opportunity for them to work with other young performers and to adapt to different theatre environments.”

So water you waiting for!?! (probably for the groans to die down on that pun). Mission: H2O debuts at the Tuggeranong Arts Centre Theatre on Friday, 29th and Saturday, 30th November. Tickets are a mere $12 and can be booked via trybooking.com/BDNGE