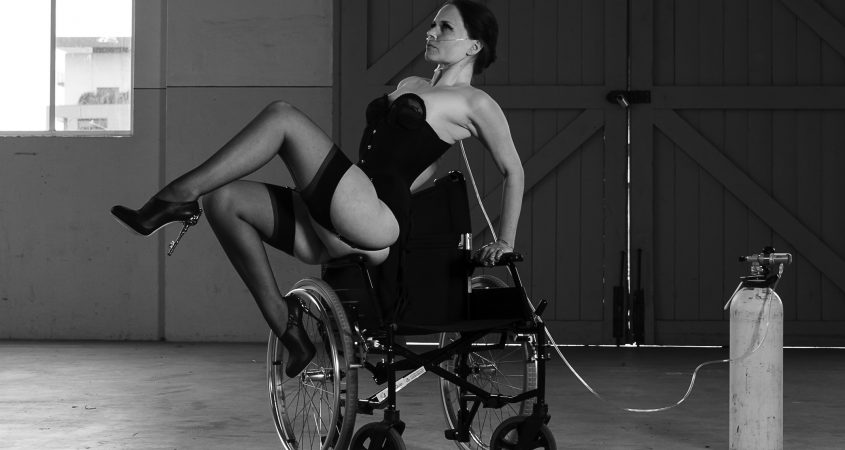 The annual Meeting Place forum takes place in Canberra for the first time in 2019. The engaging and thought-provoking three-day program will take place across leading arts and cultural venues in Canberra and will feature some of Australia’s most culturally ambitious artists with disability. Hanna Cormick will be presenting the Crip The Stage workshop and panel discussion, and she’s here to tell us all about it.

I create performance-based artworks which implicate my body as the artistic medium. I’ve been called a performance artist, physical theatre performer, actor, dancer, circus artist, auteur, director, writer, curator and activist, and my works over the last 20 years, spanning an array of art genres, have been performed in an adventurous mix of places around the world: from prestigious theatres to freezing town halls, boats on French canals, refugee camps on the Syrian border, house temples in Bali, cabaret jazz halls, inside cars in Australian heatwaves, the tops of trees in Avignon, underground urbex squats in Paris, tiny fringe festivals and major international festivals.

I used to be prolific. Now, I’m a slow-burner, creating fewer works to grow and develop over longer periods of time, but with deeper consideration.

When, how, and why did you get into it?

Art has always affected me sensorially, somatically, so it’s quite natural that when it came to me wanting to express that artistic impulse, I was drawn to forms of physical expression.

I trained in dance from age five, then in theatre from my teens. My first professional theatre work was almost 20 years ago at The Street Theatre in Canberra with Shadow House PITS, and though not my first exposure to the avant garde, it certainly sharpened my taste for it.

This training and practice drew me to evermore physical forms of art, but when my physical capabilities dramatically shifted when I became disabled, I had to start rediscovering the role of my body in art and art creation. It’s an interrogation I’m still in the middle of [lovely turn of phrase – BOSSMAN AL], one which influences my art both practically and conceptually.

What ideas do you explore?

My current practice is centered around disability activism. I describe it is “a reclamation of body through radical visibility”, reclaiming the body, my body, from social constructs, from societal oppression, from the control of illness and symptoms, from the sensorial cage of pain, from the invisibility of the marginalised, from the unimaginative ugliness of hospital gowns and fluorescent lights, from the dehumanising datafication of test results and scans.

On the one hand, it explores fairly universal notions within disability and illness politics – the Social Model of Disability, external and internalised ableism, bodily autonomy and diagnostic agency – but which are still largely unrecognised by the general public.

On the other, it explores my autobiographical experience and the way in which my specific story intersects, or is at odds, with those ideas.

But it’s also based around shifting pre-conceived notions of disabled bodies and disabled people, usually with an element of the surprising, the subversive, the playful, or the glamourous. My recent pin-up modelling series with photographer Shelly Higgs is a good example of this – subverting the visual stereotype of wheelchair users, and shifting attitudes away from pity towards expressing the power and beauty of disabled bodies.

I have just finished reading Anne Boyer’s The Undying, which is everything I’ve been looking for in an artwork to reflect the new feelings, absurd experiences, and temporal and physical upheavals of the last few years of my life-in-illness. If my art could be half as candidly unapologetic as Boyer’s writing, I would be content.

If it could also be half as brazen as a Bowie genre-shift, half as sincere and vulnerable as a Van Gogh painting, and half as fierce and glamorous as Viktoria Modesta, then I think we’re getting close to the mark.

My performance artwork, The Mermaid, has been selected for Sydney Festival 2020, which is an incredible honour. This particular artwork is also emblematic of my re-ignited arts practice, after a three-year hiatus due to illness. I wasn’t cured, but I did start making art again, and this work represents that rebellion against the anti-creative, silencing force of illness, exhaustion and social oppression.

I think sometimes people are relieved to see me creating, that it somehow symbolises a “getting better” or a silver lining. It isn’t. I just don’t really know how else to process the violence of emotion I’ve been exposed to in becoming chronically ill, except through art. I’m not proud of creating again – it’s perhaps an easy fallback, being the only language with which I am able to express myself – but I am proud of doing it in a form that was so terrifying, unknown, and exposing to me.

I’m proud of staring down my fear, and then using the alchemy of art to claw back what part of my life, and my power, that I can.

Next year involves co-curating (with Daniel Savage) artworks to exhibit with Eastern Riverina Arts’ PLATFORM for regional festivals over the year, as well as an artsACT-funded development with a troupe of exceptional actors of my stage work, Zebracorn, at The Street Theatre. Probably a lot more infusions, injections, scans, and maybe some minor slicing on the cards as well; chronic illness is a full-time job.

I’d like less pseudo-arts funding – “enlivening spaces”, erecting new buildings and committees – and more direct support to artists. These indirect funding streams do a lot to decorate civic or corporate spaces, art-wash questionable building developments, give an aura of “culture” to gentrified (and progressively soulless) commercial districts, and masquerade as creating employment for artists. But art isn’t just about providing entertainment and making things more cheerful, and civic engagement isn’t just about brighter colours and free gigs. Art can be uncomfortable, challenging our ideas, our identities and the status quo, and these initiatives implicitly censor the creation of that type of work.

They also compromise the work of the artists, who often do their best to create something meaningful and sincere, but are hampered by the straightjacket of having to fulfill briefs and of not offending government- or corporate- sponsors.

This cultural commodification and co-opting of art does exist in other places, but there’s an oversaturation of it in Canberra which only further highlights the paucity of direct-to-artist support, and indicates a kind of mistrust of the artist.

These initiatives aren’t intrinsically problematic, but when it means that funding is going there, and subsequently siphoned off into administration, bricks and community decoration, instead of to artists, that’s when we have a problem.

There are many great artists here, with brilliant ideas; fund them directly, without ulterior motive, you will be surprised at the quality of what comes out when an artist is adequately supported.

Crip the Stage: Performance and Disability is a workshop/panel event that I will be facilitating, and presenting within, for Meeting Place, the leading Australian forum for arts, culture and disability, hosted by Arts Access Australia. On I-Day (International Day of People with Disability), myself and other disabled stage artists will be presenting a series of mini-workshops followed by a panel discussion around the theme of how different artists use disability in their arts practice. It’s on December 3rd, 12pm-3pm, at Street 3, The Street Theatre, Canberra.

I’ll also be releasing a new photoseries collaboration with Novel Photographic’s Shelly Higgs, The Mermaid Virtual Exhibition, in the week leading up to I-Day. The exhibition will be released online, and was made possible with the support of the ACT Government I-Day Grant program. And, of course, my performance work, The Mermaid, will be touring to The Coal Loader for Sydney Festival in January 2020.

Crip the Stage: Performance and Disability –