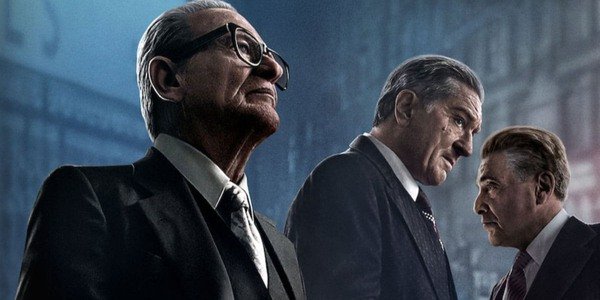 In Martin Scorsese’s The Irishman characters are not defined by how they live but how they die. Mid-scene, text flashes up on the screen with info about the fate of mobsters; often under grisly circumstances.

There’s a savagery to their demise, which highlights why they were swiftly removed from ‘the business’, and it’s brutal because it’s based on a true story.

From a nursing home, an elderly Frank ‘The Irishman’ Sheeran (Robert De Niro) reflects on his life. The World War II veteran recounts his time as a mobster, navigating the politics of a crime family (led by Joe Pesci) and his involvement with the disappearance of labour union leader Jimmy Hoffa (the best Al Pacino has been in years).

The crime bosses in The Irishman talk in mundane riddles, experienced to assume everyone is wearing a wire, and they have a saying: it’s what it is. Once a decision is made there’s no time for questions. It’s what it is.

Regret? That will occupy the time of those who lucky enough to survive, which often means betraying an associate. We never see a bulk of the assassinations in this epic crime saga that runs a whopping 210 minutes, yet Scorsese’s film is a bit like life itself; it flies by when you’re in it.

The Irishman is an immersive film that spans decades by digital de-aging its cast. Seeing De Niro and Pesci’s faces smoothed like they got lost in a videogame is unnerving at first, but you slowly accept it as a tool of the trade. 50 years ago, people complained a prosthetic nose looked too fake; the technology is not there to match the ambition yet.

Scorsese and screenwriter Steven Zaillian (Moneyball, Gangs of New York, Schindler’s List), adapting the book I Hear You Paint Houses by Charles Brandt, trace Sheeran’s involvement in the corruption of American life that eventually spills into the public arena. The rot slowly exposes itself over the course of the film. The path to the JFK Assassination and Watergate is laid out. It’s a world where men refuse to talk to each other and doublespeak rules.

But what does any of this yield?

Scorsese’s film is full of remorse, highlighted by De Niro’s performance that slowly wears Sheeran down until he realises the futility of it all when it’s too late.

Scorsese is 76 years old and The Irishman is a late-career masterwork where’s he’s measuring the value of a life through the filter of a crime saga, his go-to genre. Sheeran dwells on the past, isolated in old age and only visited by the FBI. He’s the one who outlived all his associates and kept all the secrets. Was it worth it?

The Irishman will release on Netflix on Wednesday, 27 November 2019, with a limited cinematic run at Dendy Cinemas from time of writing, Monday, 11 November.