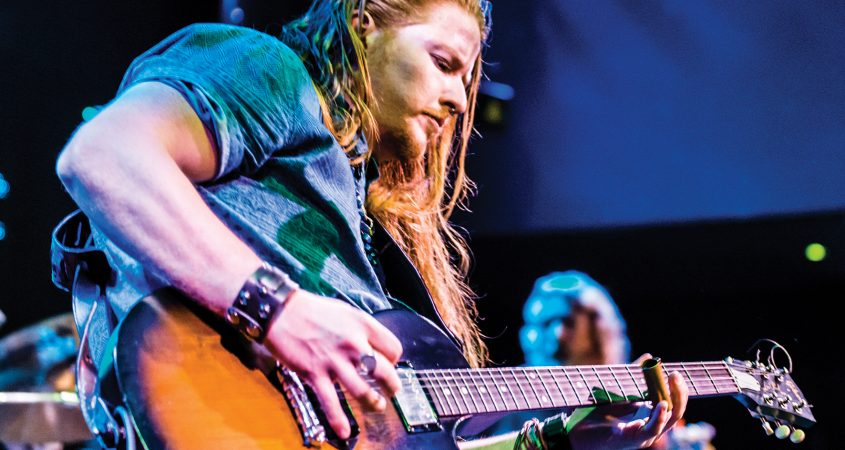 Whether in a trio or solo, James Southwell’s music career is burning as brightly as his shock of magnificent hair. We caught up with the man ahead of his Red, White, Amber and Blues Festival performance to hear what he’s been up to.

James Southwell Band. My name, with band on the end. Although, when I play solo acoustic, I drop the band part… Hahaha.

Generally the band is a trio. And, depending on availability, the members of the trio change and from time to time we add more musicians to the list, depending on the gig.

The current line-up, however, is Matthew Perin (Sunny Coast) on drums, and Ben Wicks (Melbourne) on bass. These two guys gel so well with each other, and it’s really enjoyable to have such a solid rhythm section behind you.

Funky and fun blues with rocky elements, paired with soul and groove vibes.

I learnt how to play guitar by watching a Stevie Ray Vaughan video on repeat. Trying to mimic it as best I could.

What’s one of the most memorable experiences you’ve had as an artist?

The first time I played on stage. I was 13 or 14. It was with The Kevin Borich Express with special guest Phil Manning at my parents’ wedding. I was incredibly nervous, and almost didn’t play, but I eventually jumped up and it was the best thing I could have done. That moment really lit a fire in me and gave me the drive to keep playing more and more, and to be able to do the things I’ve done up to this point in my career.

Tell us about one of your proudest moments:

Convincing the love of my life Alanna to marry me. Then, of course, our incredible daughter, and her little sister that’s on the way. Being a husband and father are the two things I’m most proud of in the world.

My future plans are to keep writing and playing music. To look after my family, to maintain my playing and performing, while always trying to improve as a person and musician, and hopefully entertain the people that I’m fortunate enough to play in front of.

My wife, my little girl, silly movies, and Rick & Morty.

Ignorance, and some people’s inability to be empathetic.

The few venues we have are great, though I would always like to see more. I would especially like to see more booking, promoting, and encouraging new original bands, playing their own original music.

First, latest record. Recorded just out of New Orleans, at the famed Dockside Studio. It came within a whisker of a Grammy nomination, and was the number 1 played blues album in the country. Top 10 for over a year.

It’s James Southwell – The Dockside Sessions, Where The Wind Blows.

Listen on Spotify, buy from jamessouthwell.com or grab one at a show.

Also, the Red, White, Amber and Blues Festival. Happening this 25-27 October at The George Harcourt Inn. It’s a huge three-day event showcasing the best talent from the who’s who of Aussie blues. You’ll enjoy tunes from top blues & roots artists, cold beers, delicious wines, and great food. This is a first-of-its-kind festival for Canberra and tickets will sell out. Book a pass for a single day or save heaps with a three-day pass and enjoy an amazing weekend of music, food and drink.

Get your tickets at georgetix.com