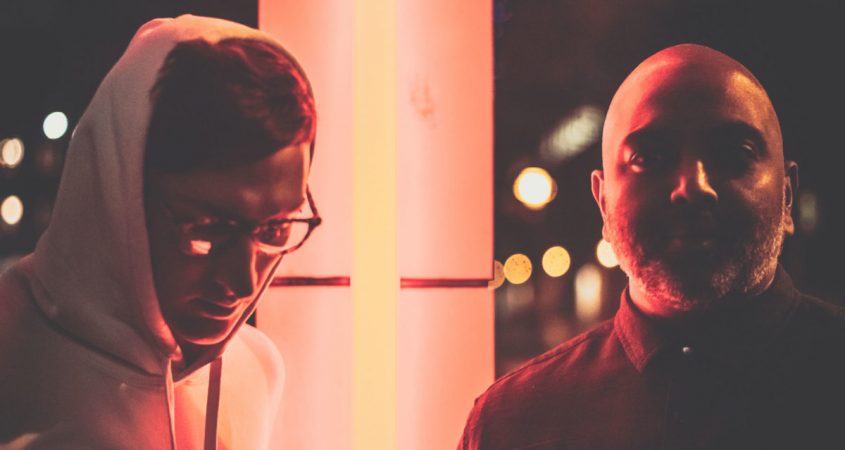 It quickly garnered a wealth of glowing reviews from notable outlets, described as, “uncompromising, insightful and rather awesome – 9/10” by Mixmag and, “impossible to categorise – 9/10” by DJ Mag.

A short while later, 20/20 went on to claim the title of Best Breakthrough Label 2016 in DJ Mag’s Best of British Awards.

Upon further research, it positively floored me (in the best possible way) to learn that Ivy Lab are duo Sabre and Stray. Sabre is known to his bank manager as Gove Kidao. He is also known to me as my old school mate from England.

Cue the flashbacks that now hindsight present as prescience.

Not only was he one of Ashlyns school’s nicest fellas, but his passion for music even then was evident. He would spend minutes on end of a Monday morning, intricately and loquaciously detailing the sonics of the latest drum & bass gem he had unearthed from a weekend’s dusty-fingered foray into London’s vinyl vaults. He was the go-to DJ at our respective 18th birthday bashes, and I remember as clear as yesterday that – as he completed another flawless blend and glanced from decks to crowd, earphones hanging half off his head – he absolutely “looked the part”.

So whilst it delivered a delightful surprise to discover that this beloved music was in fact from an old school mate, it’s actually no shock that Gove/Sabre and partner-in-grime Stray have gone on to stir a bubbling sonic melting pot of drum & bass, dubstep, hip-hop and techno with aplomb.

Following on from their acclaimed first artist album  – the terrifically titled Death Don’t Always Taste Good – the duo show no sign of slowing with this taught ‘n’ terrific four-track, 15-minute EP; a release that houses one of the year’s best tracks in any genre. We’ll get to that.

Title track Stars kicks off proceedings with an inspired use of blues/soul singer Shirley Horn’s Here’s To Life, the edited “heaven!” lyric punctuating each lilting bar, and it’s here Ivy Lab’s signature sound shines through; a mesmeric swirl of strings and playful synth underpinned by a beat that takes no shit. It’s a wonderful contrast. Further to this is how the core melody/embodiment of the loop remains throughout, and yet warps and changes just enough – with flourishes of added sound and effects – to take the listener on a bewitching journey. To whit, filtering the vocal to have a deep – Creepy? Earnest? – cadence some minutes deep into the run time.

From here we shift to Betty White, a collab with Barclay Crenshaw (AKA Claude Vonstroke) who injects a sense of funk and melody into the Lab’s creative, marrying a laconic, staggering beat with an equally languid fudgey-funk bassline. Layer some warped, ethereal vocals over the top and you have the high without the weed.

Which brings us to When I Go. My, oh my, what a beautiful, mesmeric slice of sonic wonderment this is. It’s the best track J. Dilla never wrote. It’s an unearthed gem from Flying Lotus. Yet it’s more than that. It’s pure Ivy Lab. Inviting you into the dreamscape with the extended “go” vocal, the track pulses and shines, adding little garnishes of sound that meerkat into the track before ducking down again. It’s lush, it’s emotive, it’s utterly fantastic.

And the EP is tied off nicely with All Day Swimming; a gentle, breezy, somewhat more uplifting track with an earworm of a melody which is added to and stripped back, and counterpointed with a female vocal that holds it all in place.

A recent study in the UK stated that the more frenetic the music you’re listening to while driving, the more likely you are to crash.

Well, if everyone drove around listening to Stars EP, not only would there never be an accident, there would be no war.

Bravo, lads. And big up the Ashlyns massive. ALLAN SKO