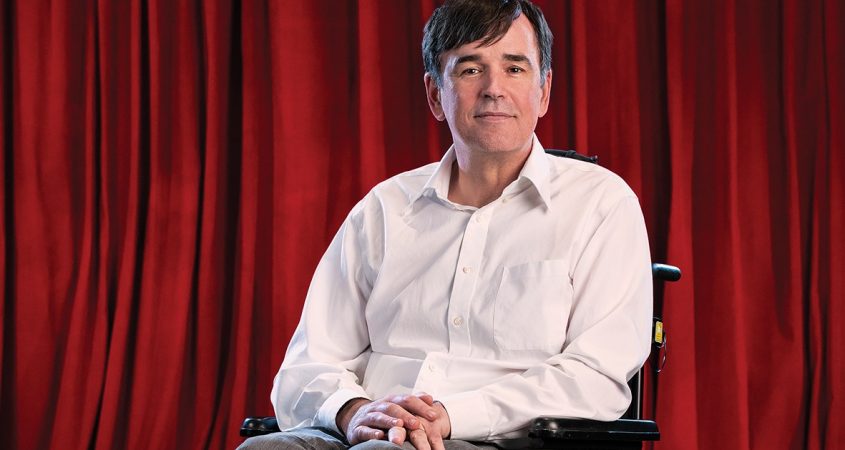 In conversation with BMA Bossman Allan Sko about life and death. But mainly death.

“There’s no point sitting in a wheelchair on stage and talking about the weather. There’s more fun to be had; there’s more creativity to be found by looking on the lighter side of things that are, on the face of it, terrifying.”

So sayeth the frank and hilarious Tim Ferguson, the little-Canberran-that-could, Doug Anthony All Star who was good enough to take time out of his hectic schedule of movie-making, teaching at NYU, and touring, to chat ahead of his new The Street Theatre show A Fast Life On Wheels.

The show is heart-rending tale of a young boy who fights and fights and never gives up on his dreams. Nah, not really.

“It’s comedy, so it comes at you pretty hard and fast,” Tim says. “It’s about keep on rolling, living a fast life. But at the end of the day it’s built to make people feel better than they did when they walked in. It’s still very much a Doug Anthony All Star, and a Canberran, so I don’t really worry too much about treading on toes. The main thing is fun, and laughing in the face of adversity. And Queanbeyan.”

But surely our dear Tim hasn’t ever spared even a passing thought to stepping on toes?

“Never. Unfortunately,” Tim dryly states. “From the Canberra busking days until now. I can’t really worry about audience feelings. Everyone finds something offensive if you talk long enough.”

“It’s comedy’s business to point out the truth in a way that people may not have thought of,” he says. “So I talk about disability, sure, but I try to point out that disability is a bit like male pattern baldness; it’s doesn’t stop you from being able to do things. You’ll just never again make love.”

Tim is full of such lessons, which is hardly surprising.

“I’m one of the very few, if perhaps the only, teacher of narrative comedy in Australia,” he says. “People easily, and mistakenly, think we don’t need it or, even dumber, it can’t be taught. When I teach at NYU, the students have already been taught a bit of comedy. Nobody argues.

“Whereas you can do any writing or screenwriting course in Australia and the chances are nobody will even mention comedy, even though it’s the most popular form on the screen. You look at the Melbourne Comedy Festival and it’s the biggest ticketed show in the country, and nobody thinks, ‘there might be something here to learn’. It’s really very odd. I’ve taught it in Canberra a few times. And it’s great to see people leave with the beginnings of How To Make An Audience Laugh. There are tricks comedians use.”

“There’s one that’s always useful, and it’s the Self-Referential Joke. That’s where the punchline either confirms or negates the set up. So the set up could be, “I wanted to change my mind… but then I reconsidered.” So it’s just a confirmation of changing your mind.

“Or you can do a negation: “I’d be patient… but it takes too long.” So once you start playing with that, you start to recognise that these kinds of jokes are everywhere, and there’s a very simple rule. And this can work with how characters work; comic characters are usually simplified and exaggerated. Nobody watches The Simpsons waiting for more depth from Homer.

“They’re really simple things. A lot of the time, I’ll just confirm that it’s a thing, and people will walk away saying, ‘I knew that in my heart, now I know it in my head’. If Aristotle said it then it must be a real thing.”

I mention this is similar to a writer/storyteller’s introduction to Joseph Campbell and Vogler’s The Hero’s Journey, which maps the narrative beats of nearly every story ever told.

“Yeah, Steve Kaplan has written a great book called The Comic Hero’s Journey which is effectively the Vogler/Campbell pattern,” Tim says. “I was sitting there slapping my forehead. It’s like, when a classic hero hears the call they go, “No! I must stay here and look after my family!” The Refusal To Call. Whereas a comic hero hears the call, you turn around, and they’ve already gone! There’s no discussion; the comic hero has LEFT THE BUILDING!”

Casting aside the comedic text books for the term, talk turns back to Tim’s upcoming show, and its raison d’etre.

“If you’re going to be funny, you might as well be funny about something important, or else you’ll walk away having not learned anything. It’s like being given the minty wrapper without the minty.

“It’s important to talk about death, which is HILARIOUS,” Tim continues. “Death just keeps on giving. It’s the one thing everybody in the room agrees upon. Somebody once asked me what my epitaph should be. I think I’ll go for: “Here’s a funny thing…” That should do it. I imagine I won’t look too funny.

“Darkness is everybody’s friend when it comes to making an audience laugh. Most people don’t think about dark things very often, so the surprise it brings makes comedy much easier to engineer.”

I mention the Aussie gallows humour that many international comedians point out.

“Right!” Tim says. “Because we used to have them. There’s a cell, a Jungian memory, in the mind. We used to hang people. These days we just put them in the senate.”

Before stating his keenness to return to Canberra, I look to teacher Tim for a nifty way to end the article.

“The main thing,” he says, “is to never end a sentence with two exclamation marks!!”

Tim Ferguson’s Fast Life On Wheels rolls into The Street Theatre on Saturday, 19 October. Tix range from $44-49, and are available from thestreet.org.au/shows/tim-ferguson-fast-life-wheels