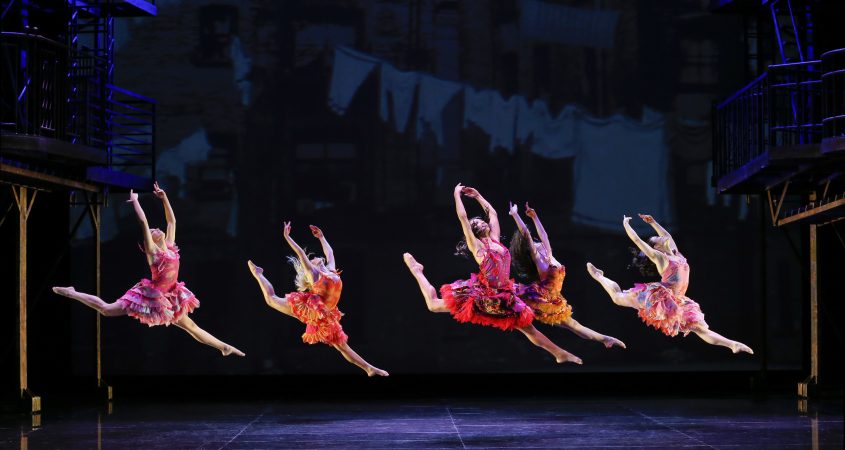 Pop music changed for all time when The Beatles emerged onto the world music stage, and the stage musical changed for all time when West Side Story hit the stage. Conceived, directed, and choreographed by Jerome Robbins, the original 1957 production blended dialogue, acting, songs from wistful to exuberant, and a range of fancy dance styles, and in so doing brought a seething social issue to the theatre in the form of riveting entertainment.

For those who have so far not seen a production of West Side Story, it’s a modern-day retelling of Shakespeare’s Romeo and Juliet, replacing the feuding Italian families with feuding New York street gangs. Acted partly through wonderfully choreographed dance, the romantic tragedy ends on a note hopeful of reconciliation.

Author Laurents’s script; Stephen Sondheim’s lyrics and Leonard Bernstein’s music and orchestrations (a match made in heaven); and Jerome Robbins’s choreography were absorbed wholesale into the 1961 film (which Robbins co-directed) starring Natalie Wood and Richard Beymer, and have been reproduced faithfully on stage more than 60 years later in Opera Australia’s grand production. This production used live orchestras conducted by the talented Donald Chan, under whose direction the orchestra for the Canberra performances, almost all of whom were Canberra musicians, simply shone, producing music that at times moved us close to tears even before the singers added their voices.

Opera Australia’s production has brought to this classic much great singing (with Sophie Salvesani, as Maria, and Noah Mullins, as Riff, standing out) and fantastic energy, backed by a robust high-rise set and lighting so precise that, of two groups near each other on an open stage, one remained entirely in darkness while the other stood out under bright illumination. But most dazzling of all perhaps were the dancers, brought in from various parts of Australia: their power and precise coordination most of all were a joy to behold. Dancing this good is a rarity in itself. In combination with everything else, it makes an irresistible package.