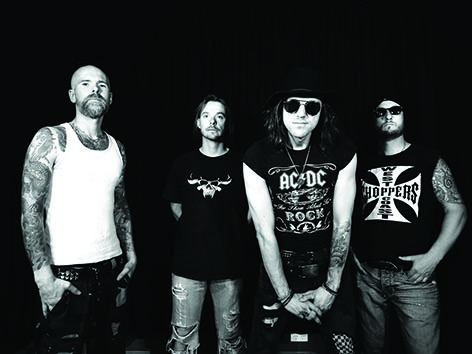 Formed in 2018, Shotgun Mistress is the initiative of guitarist Matt Willcock, a man who is usually associated with gory death metal outfits such as Ackercocke, The Bezerker and Abremelin.

Here Wilcock has moved his style to a little to the left on the rock dial, going from rabid metal to hard rock.

The moniker of the new band is a killer name for a serious rock outfit too, giving a broad hint about the tone of music to be anticipated.

The eardrum shattering opening blast is followed by churning guitars that create a maelstrom of sound. The rhythm and chorus are catchy, with a sound reminiscent of some of the harder Foo Fighters and Screaming Jets material. As guitars fly furiously, vocalist Glenn Patrick lays down lyrics that are hard hitting, both in delivery and in message.

No Friend of Mine is a serious song about the evils of domestic violence with the chorus line, ‘She’s not your toy, little velvet boy, and now she’s breaking out’. Axes clash in the stormy bridge, wailing and sending sparks fly, before the song winds up abruptly with a yell.

This debut single with an important message punches hard, yet carries a broad appeal.