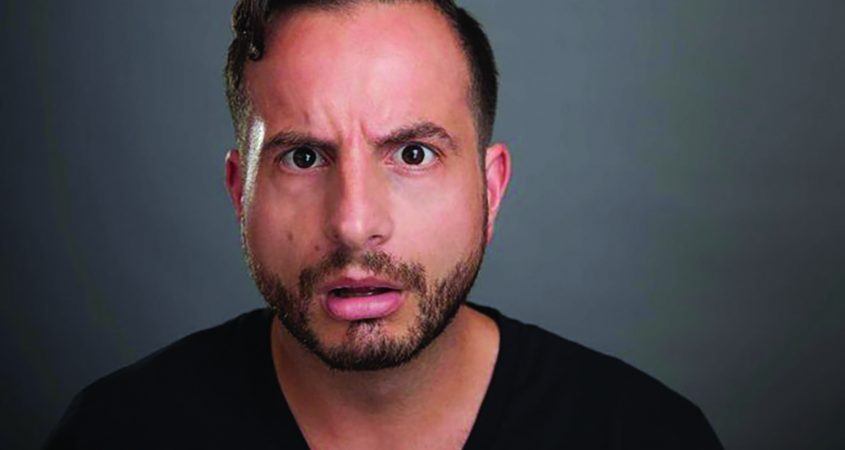 A trip to the nation’s political heart has been a long time coming for Dan Ilic and the crew from satirical podcast A Rational Fear.

And it seems like getting out of their usual haunts has been good for the show, selling out in Brisbane and Adelaide, with more to come in Melbourne.

“This year, we decided that we wanted to tour the show around Australia as much as we could,” Ilic explains. “We just made a commitment to get out of Sydney, get out of Redfern. Go see the people. It’s been really successful… We’re just like, ‘We should just not perform in Sydney ever again because no one’s allowed to go out and say things in Sydney!’”

Ilic first arrived on Australian screens in 2009 via the ABC’s Hungry Beast, a show that aimed to (and succeeded in) discovering the next wave of talent in Australian media. It launched the career of Ilic and his co-host, triple j drive announcer Lewis Hobba, as well as a host of others.

“Yeah, we all still hang out,” Ilic says. “We all talk on private messenger in our own group and we’re also very tight. We all look out for opportunities for each other and also look out for stories and for talent for everybody else.

“We’re actually a cross-media resource in our own right. We’ve all shot off and done really interesting and diverse things. Many of us have done really well,” he says, counting off the likes of Marc Fennell, Crikey’s Kirsten Drysdale, and Emmy award-winning credits designer Patrick Clair.

“None of us knew each other ten years ago when we started Hungry Beast. It was really quite fun to meet a whole bunch of 19 other extrovert egomaniacs who loved to make jokes. It was really fun meeting Lewis… Lewis is one of the smartest, funniest people I know in general. I’m truly riding his coattails.”

But Ilic says he’s actually always had a bit of a soft spot for the city. “Two of my brothers live in Canberra, so I spend a lot of time there,” he explains. “I think it’s a lovely bit of work.”

Ilic says that if anyone is feeling a little bit precious about our beloved city, it’s not him they should be worried about, but rather his offsider Hobba and his penchant for monologues that are less than flattering regarding the places they visit.

“Lewis had a scathing one about Adelaide and it was very funny,” he recalls. “The crowd was not on side at all, but he eventually turned them towards the end. We’ll see what happens!”

A Rational Fear isn’t just about Ilic and Hobba, with a track record of getting some incredible political, journalistic, and comedic minds to chew the fat.

Canberra’s line-up is as brilliant as one might expect, with Mark Humphries, triple j Hack’s Shalailah Medhora, and Mike Bowers from The Guardian rounding out the panel, with other special guests to be announced.

Ilic says getting the chemistry right on stage can be a challenge, but everyone at the Canberra show is already well-acquainted.

“What’s cool with the Canberra show is that we all know each other,” he enthuses. “It’s really fun. Mark Humphreys and I do Insiders with Mike Bowers. Shalailah and I used to do FBI radio in Sydney together as young media kids, and Lewis and Mike… Mike’s wife, Paula Kruger who does [Afternoons] on [ABC 666] in Canberra was our chief of staff at Hungry Beast,” Ilic explains, proving that the media landscape in Australia truly is a small world.

“So it should be really fun. Sometimes we book a panel where nobody knows anyone, so we hope it works, but this one’s going to be really special because it’s our friends on stage making fun of each other and everyone.”

As the interview is wrapping up and the last question has been asked, Ilic volunteers one last story that is surprisingly poignant, reflecting the importance of laughing when the world seems to be falling apart.

“When stuff is really sad in the news, it makes satire a bit easier. I was deported from Manus Island at the beginning of the year. I was making comedy with the refugees on Manus Island. When I got interviewed in Port Moresby by the Department of Immigration there, they said, ‘Why were you making jokes about refugees? That doesn’t sound very funny.’ I said, ‘That’s it. I make jokes about the saddest things.’ Anyway, she wrote that down in the report: ‘Makes jokes about the saddest things.’ That’s kind of what we do at A Rational Fear. We take what the media is making us scared of and we tell them what they should really be scared of.”

A Rational Fear will make jokes about sad things, bad things and all things political on Saturday, September 7 from 7pm at The Street Theatre. Tickets are $35 and can be found at http://www.thestreet.org.au

Support Noni Doll on Patreon!
7% complete
When we reach $500 per month we will begin the official BMA Podcast. This will include interviews with some well-known musicians and artists, tips and tricks for publishing in print and online, as well as other discussion topics around Bands, Music and Arts in Canberra!