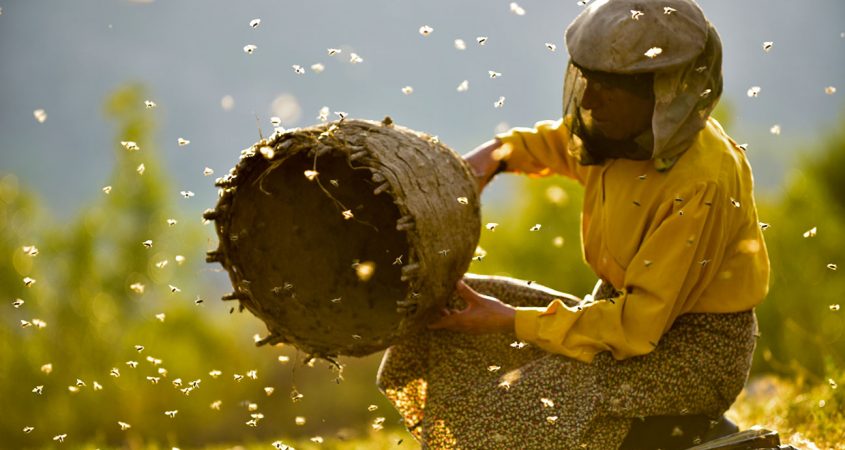 The lives of beekeeper Hatizde Muratova and her bedridden mother, Nazife, in and around their remote northern Macedonian hut, are quiet, regular, and laborious.  Hatizde’s year is largely divided between collecting and rehoming wild bees, harvesting half their honey but conscientiously leaving half for the bees to winter on, and selling the produce at a market some distance away.

Hatizde and her mother have no neighbours and see virtually nobody, until into this hard but dependable subsistence living come new cattle-farming neighbours, Hussein; his wife, Ljutvie; and their children.  Though she knows that they could easily upset her bees, Hatizde cautiously welcomes the additional company.  She even assists Hussein in setting up his own beehives, ensuring that he understand the importance of not over-harvesting the honey that they will produce.  But when disaster strikes his cattle, Hussein comes under pressure to find 200kg of honey for a single sale.

Directors Tamara Kotevska and Ljubomir Stefanov have created a surprisingly intimate portrait of the difficulties of life in a harsh environment, and it’s remarkable just how candid the revelations are that these documentarians capture: the repeated instructions and warnings about beekeeping necessities; the financial negotiations between Hussein and his buyer; the negligent destruction of a natural river crossing for the purpose of obtaining fresh bees.  Over all, its portrait of the travails of Hatizde and Nazife in negotiating a marginal life is one that paints truly and starkly the dust of our actions blowing into the world around us, largely in the unforgiving colours of treeless mountains and cloudless skies.