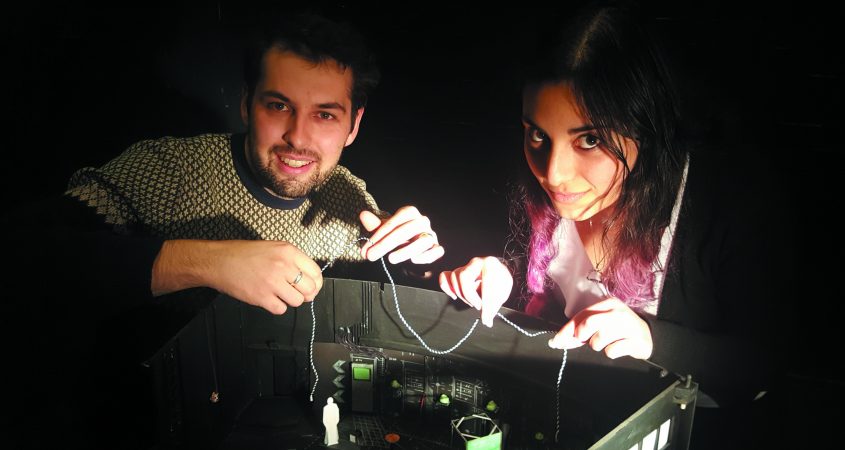 We’ve all been there, amarite?

This August, Director Adam Broinowski, and Designers Imogen Keen, Kimmo Vennonen and Andrew Meadows will be bringing to life Franz Kafka’s seminal novel Metamorphosis; a tome with one of the greatest opening lines in literary history: “When Gregor Samsa woke up one morning from unsettling dreams, he found himself changed in his bed into a monstrous vermin.”

As we are to discover, this metamorphosis is not merely literal, as both Gregor and his family are thrown into turmoil. So compelling is this narrative than the mighty Steven Berkoff took on the weighty task of adaptation, and it is his initial version Brionowski, Keen, and an ensemble cast will doing.

On the precipice of installing the new stage at The Street Theatre, two of the cast – Dylan Van Den Berg, who plays Gregor, and Stefanie Lekkas, who plays sister Greta – were good enough to take time out for a chat about this mighty endeavour.

And mighty it may be, but what in particular piqued interest?

“The idea of a physical theatre ensemble piece really drew me in,” Stefanie says. “It’s so great to be in a team and be supported on stage. It’s a wonderful kind of show to do. And to do a classic [like Metamorphosis] is a bonus! I feel like I’m name dropping when talking about this; Berkoff’s take on Kafka!”

“Berkoff adapted a number of Kafta’s works, so he’s really carved out a niche for himself there,” Dylan says. “I was also really drawn to the ensemble nature of the work, but I’m in the very fortunate position to play Gregor – the giant insect – and that’s certainly something I haven’t played before! I was really intrigued by how that will manifest on stage physically, and also how that affects the audience. So I’m really excited to mess around with that.”

With such a unique role, I wondered if Dylan in particular had been somewhat… method in his approach.

“I haven’t been rolling around in dirt or dung!” Dylan exclaims.

“Not now that he’s got the role,” Stefanie interjects.

“I don’t think I’ve approached it in a conscious insect-y way,” Dylan continues, in a serious tone of voice that belies the subject matter. “But certainly thinking about playing an insect, asking ‘what’s Kafka slash Berkoff trying to say here?’, and how Gregor’s humanity is still somehow deep within him but he’s unable to express it. So trying to get my brain around that concept to start with.

“It is quite a physical piece,” Dylan continues. “It’s one of the things that I’m excited about, but it’s also a huge challenge for me. I’m not a physical performer in the sense that the wonderful Chris is (co-star Christopher Samuel Carroll, recently seen in Hanna Cormick’s First Seen of Zebracorn at The Street Theatre). I’ve seen him in things before and it’s a bit daunting!

“But there are a lot of opportunities in the script for physical manifestation and interpretation of lives and relationships, and Gregor in particular. In various productions, he’s climbing across and up the place. We haven’t been introduced to the set yet, but I’m sure by the end there will be some…

“I can certainly save on a gym membership!” Dylan says.

Stefanie, with a more human role, was able to tap into a more traditional preparation, with a few surprises thrown in for good measure.

“Greta’s an interesting one because she starts on her brother’s side, very much so,” Stefanie explains. “And I’m not here for spoilers, but let’s say that changes. The title of the piece, Metamorphosis, lets you know that it’s more than just a guy turning into an insect. The metamorphosis occurs to all the characters. And Greta goes in the opposite direction of her brothers, and the tension that we see in that is quite terrific. For inspiration we’re looking at things like tension graphs; so like where I sit to where Gregor sits…”

Whoa now… Tension graphs? I studied A-Level Drama in England, but seemingly we didn’t pay the school enough (or, indeed, anything) to learn about tension graphs.

“Yeah, there were a lot of things like that along the way. Have you heard of Fook? I’m not swearing at you!” Stefanie laughs. “It’s a dramaturgical tool that a director would use more than an actor. She talks about the world; the look of the world, the taste of the world, the feel of the world, the colours of the world. The density of the air; all that kind of thing. And it helps you to set a scene, whether real or imagined, and it’s not necessarily making stuff up; it’s looking at the script and saying ‘what do we know as facts?’ What is Berkoff telling us?’ And in some ways, ‘how does that make us feel?’

“There are many different approaches you can take as a performer,” Stefanie continues. “Of course you’ve gotta learn ya lines! Then there’s embodying the character, and thinking what are similarities between me as a person and Greta as a person.

“And the interplay is really interesting as a performer because you need, in my opinion, to bring something of yourself into the character in order for it to have truth,” Stefanie continues. “If you can tell that someone’s acting, it’s boring to watch. So finding the truth of the piece often means finding what’s true to you. But also you can’t always play yourself, otherwise you’d end up with a personality disorder! With this, there’s so much in it that if you don’t wash the character off at the end of the day I think it might be a bit much!”

Like many folk my age, Metamorphosis was part of the syllabus at school (albeit in England) and I recall the book being largely insular, hearing Gregor’s thoughts in essentially a trapped-in syndrome scenario. This premise doesn’t exactly scream, “Stage adaptation!”

“We see a lot more of the family’s reactions in Berkoff’s adaptation than you do in the novel, which is more Gregor’s reflections on the situation,” Dylan explains. “And that struggle is reflected in the way the family relates to each other. We get a real sense of Gregor not so much through him, but through the versions of him that his family come to know. And we ultimately learn that what they value him for is not… Lovely. He’s there as a breadwinner and they’re very disappointed when he can’t go to work.”

“That is a great question!” Stefanie trills. “Probably more for [Director] Adam than for us.”

“What I’ve gleaned from our communications with [Adam],” Dylan says, “is that he’s very interested in the framework – the scaffolding – that Berkoff has provided. There’s so many opportunities there to embellish and put a spin on it. So I think there will be a few surprises; but I can’t tell you what those are!”

“And Berkoff has written it in such a way to allow for such physicality,” Stefanie adds. “You get some plays where you need the director to do that, to take the play apart and to reinterpret things. But the way it has been written (by Berkoff), it lends itself to that anyway. The whole idea of it and the insect; that can be made by all of our bodies, for example.”

Another aspect that Dylan can bring to his performance is how his work as a prolific, and successful, writer informs his acting, and vice-versa.

“I love it!” Dylan enthuses on writing. “They inform each other in so many ways. When I’m an actor I try and act for the writer, and when I’m a writer I try and write for the actor. I learn so much about the structure of work when I’m in it; it’s clearer when I can see it from the inside versus when I’m at home in my garret scribbling away. I can think – Is this going to be dreadful for an actor to stand up and read? Would I want to read this? And if the answer is no, I scrub it out and start again! That’s a great thing about an ensemble, and thinking of others.”

“I’m going to contradict myself by interrupting to say this,” Stefanie says. “That’s the benefit of an ensemble piece; you can’t be a diva. A diva can’t feature in an ensemble performance. There are no stars. And that’s a really nice thing about theatre. Although it’s fun to be a star, that competitive side isn’t as nice. And as someone who was never coordinated enough to play sports (recognised laughter on both sides ensues at this point), theatre as an ensemble is where I get that team spirit. Which is pretty cool.

Decades on, Metamorphosis remains a powerful and important piece; one that both the lovely Dylan and Stefanie are excited to show, finishing the chat by stating its potency.

“It’s exciting that a classic like this is suddenly more accessible,” Dylan says. “I remember it being on the syllabus at school. Imagine being able to actually go and see it, and have that exposure to it. It’s a great piece of literature.”

“Yeah,” Stefanie finishes with. “A friend of mine has only seen it in the West End, so to see it in Canberra is fantastic.”

Indeed it will be. Metamorphosis runs at The Street Theatre from 16 – 31 August. Tickets range from $35-45 from http://www.thestreet.org.au/shows/metamorphosis-adapted-steven-berkoff