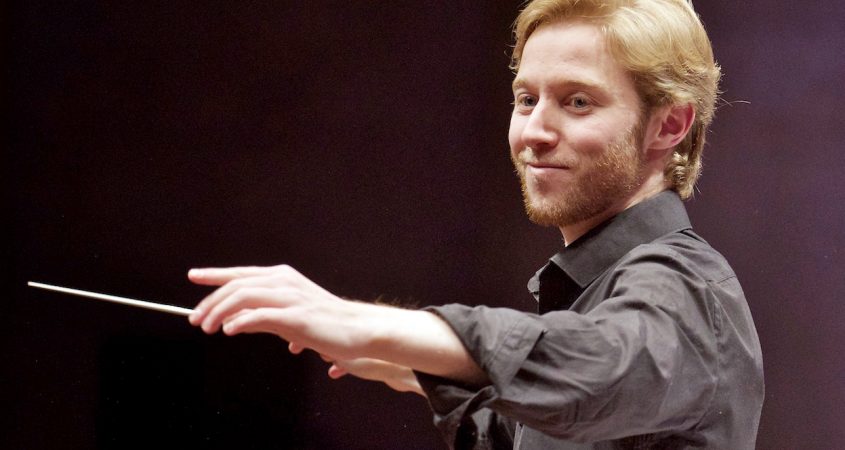 Conductor Leonard “Lenny” Weiss is a hero of Canberra and a champion of sound. Before he toddles off to home-of-The Wire, Baltimore, for a Masters degree, he has two concerts and a cracking career to discuss.

As a conductor, I shape the sound of the musicians. Most of my communication is non-verbal – or at least it should be in the concert! But in rehearsals I get to break down musical ideas, shape the phrasing of the music being played by wonderful musicians around me, and support them to give their best. When the conductor can step back and let the musicians really shine, that’s where the magic happens.

I think there are too many to name! I’ve been fortunate to watch many exceptional Australian conductors and learn how they work with an orchestra. I’m continually inspired by Benjamin Northey and Simone Young, who I’ve seen rehearsing in Melbourne; Nicholas Carter in Adelaide; and Alondra de la Parra who I get to visit again in Queensland in August.

Equally, conducting teachers and mentors Johannes Fritzsch (in the Tasmanian Symphony Orchestra’s 2018 and 2019 Australian Conducting Academy) and the late Richard Gill AO have been inspirational in pursuing this career path, and pivotal in directing my technical developments. I grew up listening to recordings by Leonard Bernstein, so to study with one of his foremost students Marin Alsop (one of the leading conductors world-wide in her own right) will be a life-changing opportunity.

The first act of Eric Idle’s Not The Messiah concludes with You’re the One where the entire cast, choir, and orchestra join in to name Brian as the messiah. When I conducted this in 2018 with the National Capital Orchestra and Canberra Choral Society, there was an incredible moment of stunned silence when the bagpipes entered, before a full Llewellyn Hall erupted in cheering. For all of the emotionally charged musical moments I’ve had on stage, and the world-class soloists I’ve been lucky to work with, that memory still makes me smile every time.

I tend to have the most fun when all of the hard work behind the scenes pays off. Generally speaking, the more people are involved in a performance, the more logistical planning is needed.

I recently concluded my time with the Canberra Youth Orchestra conducting Carmina Burana, which was the perfect conclusion to four wonderful years together. Seeing every musician truly shine and give their all for the whole concert was very special – especially knowing that for many of the CYO musicians, their time in the orchestra has been a large part of their musical development over the past few years. I’m proud to reflect on my musical influence in Canberra and see the careers take off for these passionate and talented musicians.

I’m about to commence a Masters in Conducting at Peabody Conservatory, Baltimore USA, studying with world-famous conductor maestro Marin Alsop. From there, even more conducting!

Just about anything… My family and girlfriend are quite funny, sometimes even deliberately! Usually there are a few moments in rehearsals where we can all have a laugh, or even in day-to-day work where I’m lucky to have hilarious (and hard-working) colleagues at Canberra Grammar School. These little moments of joy make everything worthwhile.

Coming up against a brick wall in the planning phase. There are very few problems which are completely unsolvable, and often challenging discussions lead to new and ultimately better, or more viable, ideas. Certainly the committees around me and the Llewellyn Hall venues team have tackled conversations and changes with professionalism and outstanding success.

I would like to think that I’ve been a part of quietly shaping the things I would like to see changed for a while. From the musical goals of different ensembles to establishing stronger links between young/amateur musicians, through to the ANU School of Music, through to the community, semi-professional (Canberra Sinfonia) and professional scenes.

There are perhaps a few things which may never change in a relatively small city – it would be amazing to have a full-time symphony orchestra, for example (I marvel at what the Tasmanian Symphony Orchestra achieves in concerts and community outreach, serving a similar population size) – but we’re lucky to be surrounded by exceptional musicians at every level in Canberra.

I encourage everyone to hear the outstanding concerts presented by organisations in the community. I’m looking forward to two more concerts in Canberra – 3pm, Saturday, 27 July at Wesley Uniting Church with the Canberra Sinfonia, and 7:30pm, Saturday, 3 August at Llewellyn Hall with the National Capital Orchestra.

Also a shout out to the hard-working musicians who invest countless hours into pursuing their passion, and the behind-the-scenes teams who make it all possible.