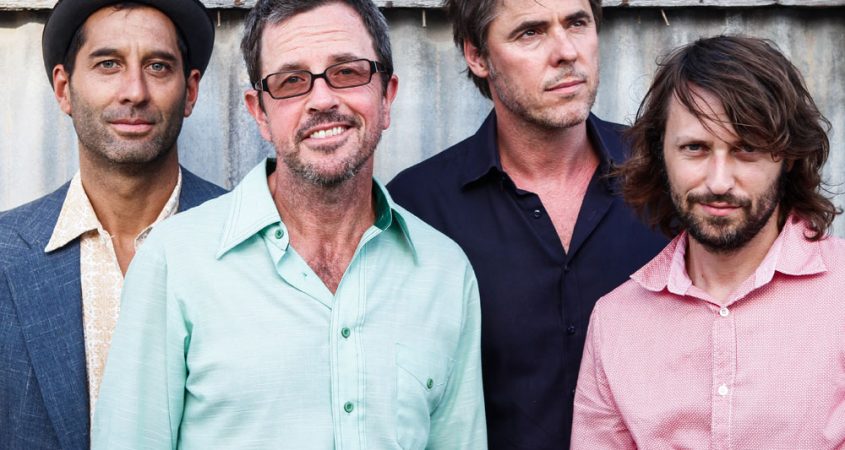 Kevin Mitchell, front man of rockers Jebediah, was in troubadour mode as his alter ego Bob Evans. He loved the Playhouse, stating it made a good change from playing the main floor in the toilet of some pub, and having to compete with the racket from the TAB and pokies.

He delivered songs of love in his slightly nasal tone, with warm strums from his fairy light bedecked guitar. Catchy tunes with beguiling rhythms flowed over us, including Nowhere Without You accompanied by piercing harmonica. Evans said the harmonica frame reminded him of his orthodontic kit at age 13.

The Whitlams celebrated the twentieth anniversary of the LP Love This City, playing most of its tracks in album order. Besides relationship topics, Whitlams songs often draw on the characteristics of Sydney, both good and bad, with the music centered on front man Tim Freedman’s terrific electric piano work.

Guitarist Jak Housden had lost his voice, but got his guitar solo in on Laugh in Their Faces. Drummer Terepai Richmond missed the trick when throwing a drumstick and attempting a blind catch behind, but he made up for it helping Jak out with the backing vocals.

Tim Freedman’s wonderful vocal tone and nuanced delivery were exemplified by his solo presentation of Buy Now Pay Later, which was just one of the many lush, atmospheric songs with great melodies included in the set. Most songs were mellow in their musical arrangements but the topics had, as Freedman said, “more causes than a university Greens meeting”, going from anti-gambling to a lack of Australian support (prior to 1999) for East Timor. The few departures from the LP included Following My Own Tracks written by the late Stevie Plunder, the “wonder from Narrabundah”.

A fantastic night of Australian music.