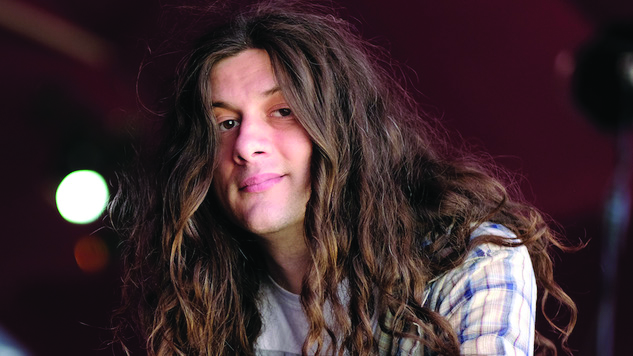 It is quiet around the footpaths of ANU on this Wednesday night. But after turning a corner and heading inside, something big is happening.

RVG from Melbourne get the crowd warmed up in a big way. Lead vocalist Romy Vager’s distinct, husky vocals are reminiscent of Patti Smith or Amanda Palmer, and she tells amusing stories to the crowd between songs.

When Kurt Vile and the Violators come on to the stage, Kurt greets the crowd with a simple “you guys are looking real, real good.” His voice rings out through the room, and peoples’ knees go weak at the sound.

They start with toe tapping Jesus Fever then move on to Bassackwards. This is a highlight, with his signature drawl, floaty, meandering riffs and psychedelic beat.  “I was on the moon, but more so, I was in the grass, so I was chilling out, but with a very drifting mind,” the lyric tell us, and he takes us up to the moon with him. When he plays I’m An Outlaw on the banjo, his trademark whoops echo through the room.

Kurt Vile’s songs have a way of feeling like they will never end, and not in a dreaded way.  Laced with elements of grunge, indie rock, shoegaze, stoner rock, they are dreamy, eerie and simply superb. Hiding under his curtain of hair, he occasionally looks out and makes eye contact with the crowd. Perhaps he is lost in a world of his own, and we are looking in on that. He seems to barely notice we are there.

With every song, he switches guitars, with the help of his dutiful assistant. The crowd is given a smattering of songs from latest album, Bottle It In, as well as older favourites like Baby’s Arms and Waking on a Pretty Daze. His band, Violators, comprised of Jesse Trbovich, Rob Laakso and drummer Kyle Spence, keep the tunes and show running seamlessly while blending nonchalantly into the dreamy haze of music. Occasionally, Kurt’s cowboy like ‘yews’ ring out across the audience.

“Gonna take you down to the islands of Polynesia, now, right now,” Kurt tells the audience leading into Cold Was the Wind. This song muses about Christmas in Siberia, and is a dark and rambling number. With the Polynesian drums looping in the background, it is an unexpected combination, but not surprisingly with all things Kurt Vile, it works.

All good things must come to an end, but not before one of the highlights of the night. Kurt Vile invites his “brother” John Sharkey from rock/punk outfits Clockcleaner, Puerto Rico Flowers and Dark Blue, and they play their version of Silver Stallion, originally by Lee Clayton. John Sharkey departs the stage by saying “see you at the Canberra Centre,” and giggles ripple through the audience.

For a select lucky few (Canberra gigs are small!), this was a night to remember. It is not every day the likes of Kurt Vile roll through this town to show off their musicianship and spread the fuzzy, chilled vibes through the souls of every audience member. Lucky us.