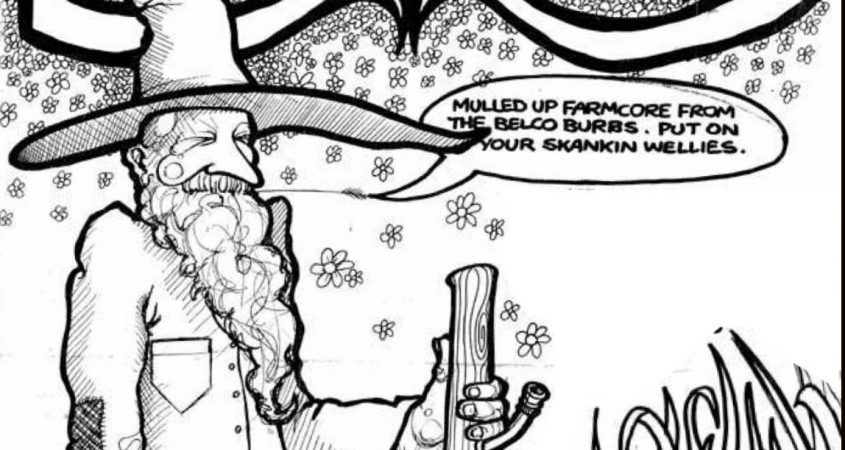 Almost 30 years ago the Drill Hall Gallery used to share the building with 2XX community radio.

A guy called Martin Shepherd used to be an engineer there, and he recorded a slew of bands that either still play today or whose presence has echoed down in the personality of the Canberra music scene through the years since.

We’re talking about a period of time where there were at least five active live music venues in the city; Civic Youth Cafe had gigs that regularly drew well in excess of 300 kids; and there was a general explosion of heavy sounds from metal, punk and alternative sources, often blending into a mutant creature all of the ACT’s very own creation.

In this climate bands came up through the live circuit and a whole bunch of them that recorded at 2XX, like Alchemist and Pod People, kicked onward to international record deals.

Forward Defence’s first demo was recorded there, and is still tape traded with religious fervour to this day.

And others feel like they may have faded into the deep recesses of Canberra’s memory like Three or Exceed’s demos. It was a thing.

One of the absolute core elements of Canberra metal was the weirdness. Stoners getting high, drinking some beers and writing songs that resulted in a fervent mosh at above-mentioned venues being a reflection, and as weird as the music were the punters responding to it.

In short, it was a fucking brilliant time for Canberra music.

Among the chief weirdos in this environment were Precursor. The band had three singers from their start in Belconnen high schools where, if memory serves, original singer Mitch sang a song at Canberra High talent night that included a Satanic prayer in some niche language to raise the dead.

This demo is with, arguably, their peak period vocalist, Simon Walbrook. The last vocalist in the band was Vee Bees front man Noro. You could make the number of vocalists four if you included guitarist and Pod People founding member Ivan Merchant’s dabble with vocals on another demo.

They were key players at a time in the band’s life when some were not quite old enough to play at The Terrace Bar and others not too old to play the Youth Cafe shows. The Granny Killing Festival gigs, for example, were absolutely bonkers. With stage dives into the infamous beam at the Youth Cafe being a real health hazard.

2XX Martin Shepherd productions were an odd thing. He would come into the room and change the settings on your amp because, to his ear, they weren’t right from an audio engineer perspective. And so, some of the demos have rather interesting mixes that were, I think fair to say, more anaemic than the live experience.

The original six songs on offer here are now lovingly restored and remastered for vinyl, and have never sounded better or clearer.

All the better to amplify the weirdness and sheer technical ambition of a band writing some genuinely interesting songs influenced by the heavy music of the late ‘80s and early ‘90s. But uniquely Canberran all the way.

It is gloriously weird and wonderful.

Nursery Rhyme Time was a big mosh starter back in the day, with its signature bass intro.

Velvet Buzzsaw was written about one of my first group housemate’s relationship with an ex.

Night of the Dreaded Wee Wee Rats is like a Voi Vod flavoured burst of riffs with a song title sillier than the more sinister vibe the song kicks out.

This is produced way better than the hand drawn, oft photocopied tapes we all did back in the day. The 10-inch vinyl is 30 bucks and its audience is going to be for those who were there at the time and want to be instantly transported back to Canberra in the early ‘90s.

If you’re not in that age bracket, what you are hearing is the DNA of Canberra heavy music that carries through to this day. Despite the weirdness, the core essence is a time capsule of Canberra when the Belco skatepark was brand new and The Basement was Pete’s Bar & Grill full of bus drivers.

Precursor played the first two Metal for the Brains before fading away. Until now. For many of us, they are the gateway into making music.

Uncover this gem if you dare. It’s Canberra fucking royalty.