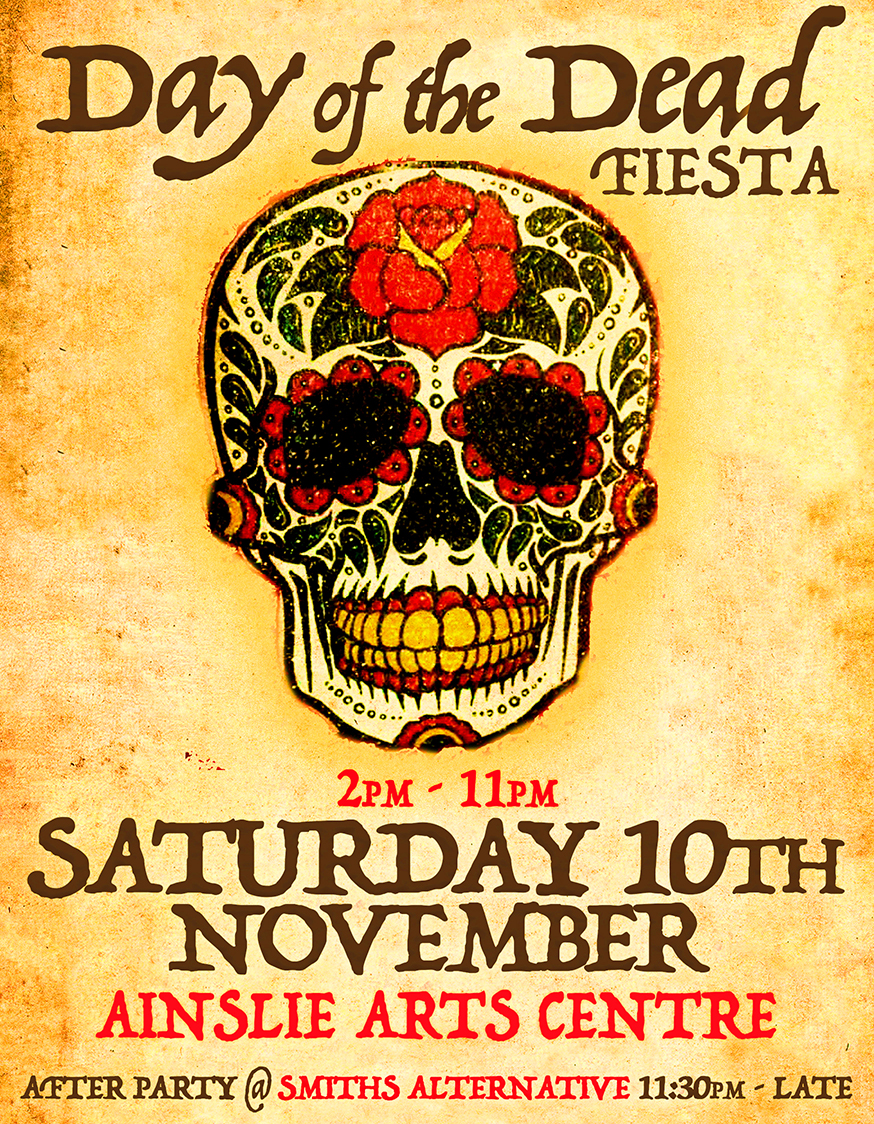 It’s an odd festival for some, an important one for others.

BMA caught up with organiser and overseer Rafael Florez to understand what it’s all about; mainly – perhaps ironically – a celebration of Life, as well as a testament to those no longer with us.

What’s so important about Day of the Dead? The celebration of death seems odd to a “Western” audience… I personally think it’s great.

As human beings with a finite life-span, we will all have to confront and think about our own death and the deaths of our loved ones, which is something that is usually hidden and not spoken about publicly in a lot of cultures.

Death rituals and traditions do vary from culture to culture and in particular the Mexican take on the subject is one that really resonates with me – even though my family is from Colombia not Mexico. What better way to really understand what is important in life and get a reality check than to really look at and comprehend that you and all your friends and family who are alive now will eventually stop existing?

It’s actually a festival about Life and a festival for the living to remember and celebrate those who have passed on – as we will pass on too – and rather than be sombre or macabre, it is vibrant, corporeal, messy, loud, colourful and wonderful!

What led you to pick the acts on the bill?

My brief for myself for the bands and performers is to try and focus on accessible but not necessarily popular or well known styles of music – in fact I always try to bring something that has not been performed in Canberra before so that audiences get something that they can’t get anywhere else.

A strong Afro-Latin theme holds it all together but we don’t stick to ‘Latin’ or ‘World’ at all.

There is so much amazing talent in our own city – we’re proud that the festival has a majority of local bands and performances too.

We try and bring one band from Sydney and one from Melbourne – in particular the Latin scene and the Cumbia scene in Melbourne is super strong – the best urban Latin sounds coming out of the country I think – so I always like to pull from that scene of bands and artists that are doing amazing things showcasing folkloric Latin American sounds and mixing them with modern and urban genres.

This year we’re really happy with the spread of genres and bands – there are a couple of groups that we showcased in previous editions – locals FunkyTrop + Brass Knuckle Brass Band – and of course Los Chavos who are the festival stalwarts – the origins of the Day of the Dead Fiesta in Canberra actually started in 2012 with the album launch for Los Chavos over at the old ANU Bar!

For the performances this year we’ve also pulled from local community groups that will bring their folkloric dances to the festival, and in particular I’m excited to bring back the Colombian Cultural + Folkloric Organisation – who we had way back in 2012 – as they bring some crazy Afro-Colombian energy and colour to the festival.

Dancers and styles that have a deep historical roots and are a world away from salsa and what people normally associate with Latin dancing.

Finally, as always, the Mexico Lindo group will be performing a very theatrical Aztec dance which is something to behold! I get goosebumps each time I see it!

What kind of effort goes into such a big celebration?

Lots of juggling is involved with an ambitions grass roots community festival like this one. While we kind of know what to do after so many years, I try and make it better and refine the concept each time; trying to craft a more interesting audience experience.

I was overseas for most of the year so I did a lot of the ground work remotely. But it’s a full time job for a couple of months at least!

We hope to partner with other organisations in the future to make it more sustainable and eventually make it one of big festivals on the Canberra events calendar – kind of like a mini Multicultural Festival but with a tighter focus.

What makes Ainslie Arts Centre a good pick as venue?

This is the third year we have had it at the venue – and we love each space that the building has – from the great Main Hall where most of the bands play, to the communal courtyard.

But also all the smaller rooms where we can do cool things like video projections and kids’ projects.

What’s your favourite aspect of Day of the Dead Fiesta, considering there’s so much going on?

Of the regular stuff we have each year my personal favourites are the Piñata and the Ofrenda (Altar).  The kids Piñata has a live soundtrack from Raio De Sol Community Samba band and its always it’s great to see the kids get into it! The community vibe in the courtyard during this part is really what I’m trying to tap for a festival like this.

And the Ofrenda (Altar) is also really important as we’re not just trying to brand this festival with the Day of the Dead – we want everyone who comes to leave knowing something more about the tradition.

We are all going to die eventually – everyone has to confront and think about the death of loved ones – so the Ofrenda is very important for us.

Just want to encourage people to see as much of the program as possible. It’s a full nine hours so we hope people can really absorb the history and flavour of the event with their time here.

And then we can all relax and chill out at the after party!

Experience the vibes and atmosphere of a Latin American Fiesta at this family friendly celebration of music, dance, art and the amazing tradition of “Dia De Muertos” over one huge day!