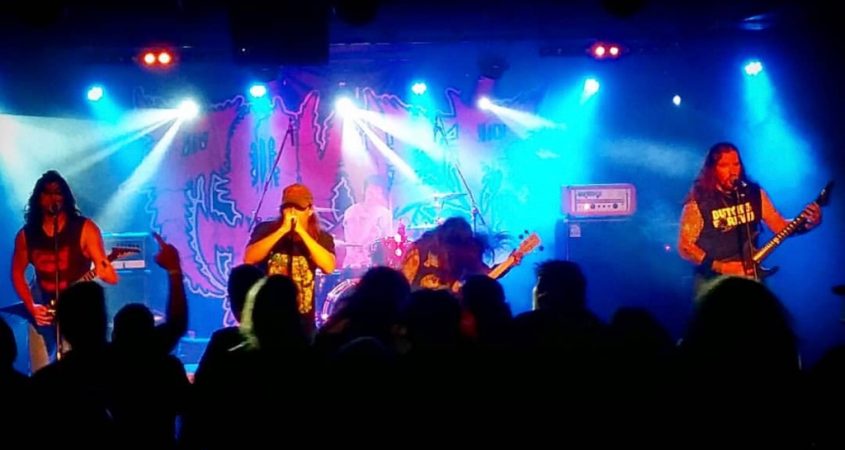 Mental Cavity kicked off proceedings at the very sensible time of 7:30 with 40 furious minutes of music from their EP and full length album, as well as an Autopsy cover with guest vocals by I Exist alumni Sam Provost. The band are also supporting Conan and Bellwitch in a few weeks so make sure you get along early, they’re in great form at the moment.

Shackles from Byron Bay make music that is a lot angrier than you would expect hailing from that part of the country. With a blender of heavy sounds incorporating modern hardcore, crust, and traditional metal flavours the band ripped into this, their 4th show on a national support of this tour and certainly upped the ante from their last visit to town 2 years ago at a house show. Good things ahead from these guys I reckon.

Power Trip walked on to an ominous sounding electronica note which was about as close to a keyboard was going to be heard this night at The Basement. For it was a classic 80’s thrash attack all the way, and keyboards are for posers.

A band that could not exist without the Marshall JCM 800, guitars tuned to E standard concert pitch (unlike the 2 preceding acts in a more modern lower tuning), Power Trip commanded the 250+ crowd off the bat and had every head in the room nodding eagerly.

The band leaned heavily on last years excellent Nightmare Logic with nearly the whole record being played, spiced with some older tunes from 2013’s Manifest Decimation.

The Sunday crowd was a little weekend weary as you might expect, so the scenes from Brisbane and Sydney the two nights prior may not as been as hectic in the pit, but a few circles spontaneously erupted purely on the quality of the musicianship on display.

Rounding off the set with a very brief break, they returned to the stage on the back of some enthusiastic “HELL YEAH’s” from the audience and closed up the show with a killer rendition of Crucifixation and sent those gathered home with a nice sore neck and a little healthy Monday hangover to boot.

This band will be back and going on the sold out shows in the other major state capitals, will be at larger venues next time. Great show.