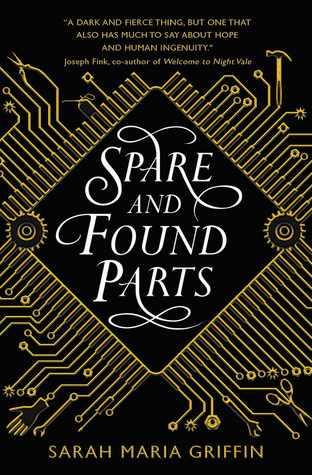 Set in a swirl of cogs, tools and mechanically augmented limbs, Spare and Found Parts could be mistaken for steampunk – except there are batteries and diesel generators and nary a snifter of steam.

Nell Crane lives in a post-apocalyptic somewhere, quite possibly Ireland, with the remains of a community in the remains of a city. In the collective memory, computers and the internet are responsible for the fall of society, computer code is taboo and anything that seems like a thinking machine is grossly evil. Which puts Nell’s family in a complicated position as their business is biomechanical prosthetics, sorely needed by the plague-ravaged populous but suspiciously close to pre-apocalypse computer nasties.

It’s definitely something-punk. It’s interspersed with detailed and loving descriptions of the tech. It’s set in a dystopian two-tier society where the upper class are off somewhere unattainably lovely while everyone else scrapes along in the dirt. The plot revolves around a budding biomechanic and her creations. But unlike the various steam-stone-atomic-cyber punk genres that are proliferating faster than over-the-shoulder bumbags (seriously, why?) Spare and Found Parts fetishizes the technology of right now. Smartphones and fitbit-esque gadgets are salvaged and pored over by Nell in her quest to create an unreal boy. Because some faff about resurrecting lost tech for the greater good, but mostly because dating options in the plague-blasted ruins of (probably) Ireland are thin on the ground.

And also because punk = rebellion, there are subversive elements too. Taboos are made to be broken after all, and there’s some low-key feminism. Nell’s more a Bella Swan than a Hermione Granger though; her intermittent pity parties are sometimes justified but sometimes snotty and alienating. She’s also more Dr Frankenstein than Geppetto, indulging in some callous but entertaining shenanigans in her increasingly desperate attempts to engineer a friend that will put up with her bullshit.

The teenage melodramary of some of the relationship dynamics does circle the rim of staid and predictable, but given time, circles right back out again in most cases.

If you’re not already into the -punks, Spare and Found Parts is not going to convert you. Although if it ever comes out as YA movie there’d be worse ways to spend two hours. If fantasy is your jam, Spare and Found Parts checks a lot of boxes: a believable world, a business-like commitment to moving the plot forward, and divertingly flawed characters.

And that Griffin (or someone at Titan books) really gets the fandom of the -punk genres and sub-genres is evident in how stylish the book is as an object, with the 2018 paperback edition having strikingly red-edged pages. Not a prerequisite of great literature but cool nevertheless.