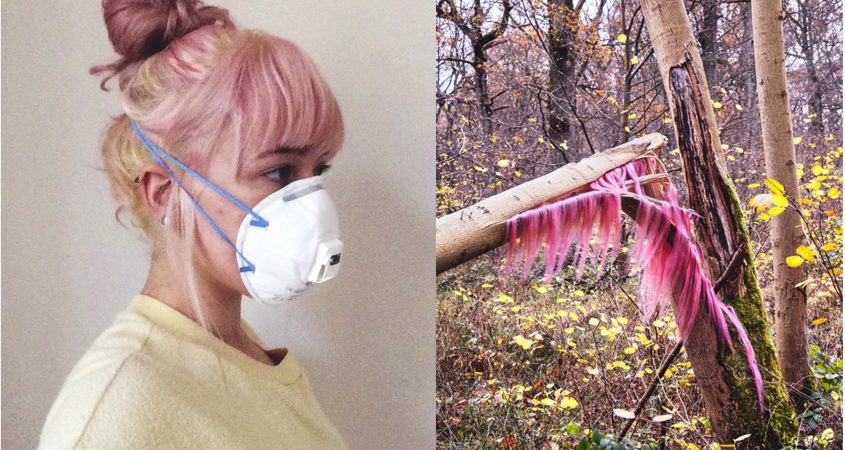 Sophie will be exhibiting her installation at Renaissance

What is the meaning and importance of Art to you, and when do you think you first realised this/what made you realise this?

I think I first started taking photos as a teenager in order to try and understand people and what was happening around me. Art to me is a way that breaks down social constraints that helps me to reach out to other people and share my experiences and curiosity with them.

I remember back in the days when msn was still a thing, a boy in one of my classes messaged me to tell me that he knew I liked him because he saw me staring at him in music class. I remember finding it both odd and funny, as at that point sexual attraction to him hadn’t occurred to me. It was also a bit frustrating and constraining, as though I needed to start censoring myself. In truth I was looking at the way some of his freckles seemed to dissolve into the rest of his skin with no distinct borders, while others where clear dots, and thinking about how his skin and body had formed them.

Could you please give me a brief history of you as an artist?

I completed my first studies in Photography in Paris. When not studying, I spent most of my time walking around Paris with my camera photographing whatever I could. I subsequently found myself involved in the local art and music scene photographing bands. It was during the second year of my studies that I discovered that I preferred the meditative aspect of the creative process of building something in the studio, instead of purely capturing something on camera.

After my studies my first group show was with La Société de Curiosités in Paris in 2014. I exhibited again in Athens at the Blank Wall Gallery in 2015, and then again in Berlin opening at the Jarvis Dooney Gallery during the Berlin Gallery weekend in 2016. Last year I was part of the PCP Landscape CLIP award exhibition after my photo of the installation Splintering was shortlisted for the award.

Could you please give me a brief overview of your style and its origins?

The colours pink and blue play a big role in most of my work, due to their origins for me in entropy in thermodynamics. Pink representing high energy heat particles, and blue representing low energy cold particles. I find it funny because I’ve had pink hair consistently on and off since I was about 14, but I’ve never gone blue though I’ve always talked about doing it. I usually go for softer pastel versions like baby pink and blue because I am attracted to that aesthetic. It is important to me as an artist to combine what is perceived to be a more conventionally-masculine side of my personality (that has been influenced by ideas in art and science that started with the Renaissance and the Enlightenment), with that of what has often been seen as, and subsequently dismissed, as a softer, more feminine energy and aesthetic.

Who or what would be your favourite artist or artwork from the Renaissance period?

I quite like the aesthetics of the portraits of the Dutch Renaissance artists like Jan van Eyck. Possibly due to their influence on the painter Grant Wood, whose painting American Gothic became kind of sacred to me when I first had to take photos of people in a studio setting. There is something magical about the way that they capture light and the effect that it has on skin, rendering humans not quite human.

Any plans for this year regarding upcoming exhibition, competitions or collections?

The next event coming up for me is one of my artworks being included in the first group exhibition of 2018 at the Jarvis Dooney Gallery in Berlin, in what Michael Dooney, one the Gallery owners, describes as a ‘Petersburger Hängung’ of postcards, presented on tables through out the gallery. The exhibition is inspired by alternative exhibition formats, investigating the extensive possibilities of a gallery space, and is an experiment in new ways to exhibit work in the current climate of the European Art world.

The image of mine that was selected is called Flesh and Bones, 2017. It is also part of my ongoing series of installations of chemically processed and hand dyed human hair, which is combined with elements of, or within, a natural landscape environment.

How are you interpreting the theme ‘Renaissance’ in your artwork for the event?

I am interpreting the theme of Renaissance through that of the idea of the process of renewal and regeneration. My main installation for the event is called Picking at Scabs. This work is part of my ongoing Matter project, which is images of installations of chemically processed human hair within, or combined with elements of, a natural environment and landscape. It is an installation made up of hand-dyed, chemically processed human hair, and tree bark.

Picking at Scabs comes back to the idea of tension between that of two of the different stages of healing flesh: Necrotic and Granulating. Coming out of the four different states of healing tissue: Necrotic, Granulating, Sloughy, and Epithelizing. Granulation being the process of fibers coming together to create new tissue during the healing process, Sloughy being mostly necrotic flesh trying to separate itself out from the body, and Epithelizing being a hardened barrier created to protect the granulating tissue.

What about the event Renaissance is most significant or exciting for you?

I am excited about having the chance to meet other Canberra based artists, discover their work, and see how it will be similar to, or offset my own. I am also excited about making an installation as part of my Matter project from scratch, in a controlled environment instead of within a natural, unpredictable landscape.

What is inspiring you at the moment?

The book I’m reading at the moment Torpor by Chris Kraus. There is a beautiful line in the book where a character notices that their hair is thicker in a photograph, like her body had prepared itself for winter.

Do you find Valentines Day a genuine opportunity to celebrate love, or is it just yet another tasteless day framed by commercialism and the media?

Valentines day is what you choose it to be for yourself and/or your partner. Everything in mainstream society and the media is pretty much there to make us consume more. Creating a day to be thankful for the presence of your partner in your life is a pretty benign capitalist hidden agenda in the grand scheme of evil conspiracies. Where it gets more toxic on a personal level is some of the gendered aspects of it in terms of expectations and the idea that your worth is measured by the presence of another person in your life. Again a lot of that is a personal choice and comes down to self-care and development.

RENAISSANCE is set to take over The Hamlet on Lonsdale Street, Braddon on Friday March 2 from 6pm. Free entry.

Liked it? Take a second to support Tegan Garnett on Patreon!

Support Tegan Garnett on Patreon!
7% complete
When we reach $500 per month we will begin the official BMA Podcast. This will include interviews with some well-known musicians and artists, tips and tricks for publishing in print and online, as well as other discussion topics around Bands, Music and Arts in Canberra!