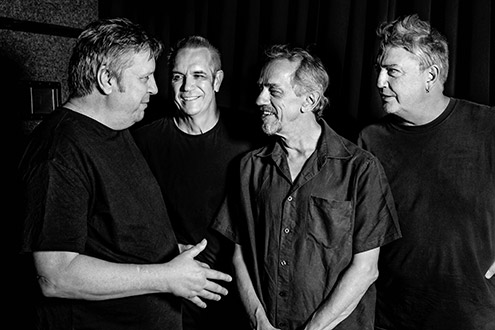 When it comes to Aussie bands and checkered careers, SUNNYBOYS are right up there. After startling initial success with their self-titled debut album in 1981, they collapsed due to internal band issues in 1984. There have been assorted re-runs of the band, with original member Jeremy Oxley in the lineup, with limited success.

Somehow, the punters who grew up with the band have never stopped appreciating the Sunnyboys’ songs and the response to a series of shows featuring the original lineup has been phenomenal. Now the Sunnyboys are returning to Canberra for their first gig here since 1983 and BMA spoke to bassist Peter Oxley in advance of the early 2018 show.

It is remarkable that the complete original lineup has regrouped for a run of shows, such a long time after the band first broke up. Oxley agrees.

“Yeah, it is amazing. We got on with our lives and didn’t think we’d ever actually play again, due to the circumstances of Jeremy. But, if you start playing music, it’s always in you.” Various band members followed on with their own musical interest when Sunnyboys split.

“I formed a band with my sister, Mel, called The Sparklers. Richard [Burgman] went on to play with Chris Bailey’s Saints and also Weddings Parties Anything. Jeremy always had a guitar with him, wherever he was.”

Jeremy Oxley’s battle with mental illness was a key feature of the band’s original demise. It was ironic that, while his illness was the reason behind the Sunnyboys folding, Jeremy Oxley still led the push with alternative lineups before all the original members reformed.

“He put together a version of Sunnyboys in the late 80s. It didn’t work out so well as he was not in a good place mentally at that time. So, it didn’t last for a great deal of time.”

1998 saw the band reform for the Mushroom 25 Concert, celebrating a quarter century of that record label. There was another big gap until 2012, when the Sunnyboys were asked by the Hoodoo Gurus to play during the Dig It Up show at the Enmore Theatre.

“We thought, ‘let’s get together and see how we go, and see if we enjoy playing and if anybody likes us’.” They were billed under the name Kids In Dust, a moniker the band had used in the 80s when they wanted to play secret shows, on the QT.

The show inspired the band to keep going, and the members were happy to oblige, playing shows since that time. If it had not ben such a success, the band had a fallback plan. “We thought we’d better play under Kids In Dust so if it was a total disaster, if people said ‘We saw you guys at the Enmore and it was terrible’, then we could say ‘that wasn’t us, that was Kids In Dust’.”

The vibe of the band has come a long way since their original formation, as the whole dynamic of performing has changed.

“We play better now than we did when we were 21 or 22. You play with a little more swagger, and definitely sing better, as you’ve been practicing singing all those years.” Oxley cites Keith Richards as an example because, while people might look first at his age, Oxley believes he is probably playing better these days and having more fun doing it. There is less pressure on the band compared to the heady days of 1979-84.

“When we were young and signed to a record label, you make an album, tour that album and do film clips. You hoped that people would buy it. There was pressure to play a lot, so we used to travel in little mini vans with our gear, up and down the Hume Highway. Now, there is no pressure on us whatsoever.” The band can concentrate on putting on a good show, which is more of a celebration of their music, than part of the serious business of promoting its latest release. There is a different interaction with the audience too, compared with the agro days of youth.

“Gigs are so calm now, everyone is smiling. Friends have told me ‘Your audience is so polite’.” The band loves it when parents bring along their 20-year-old children to show then them the actual band that made the records the parents have been playing all these years. Oxley also appreciates that people cannot smoke in venues anymore. “It’s much more pleasant. Sometimes in the early 80s, your eyes would be watering in the room because of all the cigarette smoke.”

As to what he attributes the response of the fans, that has seen shows sell out so quickly, Oxley sees nostalgia as a factor.

“They want to relive the memories and the times. I think that’s a beautiful thing. Also, the fact that the band had a short initial life of about four years, and because the band had not played for such a long time.” However, Sunnyboys songs continued to be played on the radio and the TV documentary about Jeremy Oxley’s battle with schizophrenia also kept the band in the public mind.

“People understood what happened with the band, and there is a lot of good will and love for the band. We were not sure if we were remembered, but we have been and there has been such a great response at all the shows we have played.”

The Sunnyboys do intend to record some new songs in 2018 – “We’re not trying to set the world on fire; it’s just something for our fans.” However, that is not the main game as Oxley is cognizant of the truth of the Regurgitator lyrics: “I like your old stuff better than your new stuff.” As to whether Sunnyboys will play any new material at the 2018 shows, Oxley is coy, stating it depends how they sound when they are rehearsed. One thing that will not be in the setlist, which will concentrate on the first three Sunnyboys records, will be any tracks from the album Wildcat which was made in 1989 with a different band lineup.

SUNNYBOYS, supported by UPS AND DOWNS, play at CANBERRA THEATRE CENTRE from 7:30pm on Thursday February 22. Tickets $70.50–$88.50 +bf through canberratheatrecentre.com.au