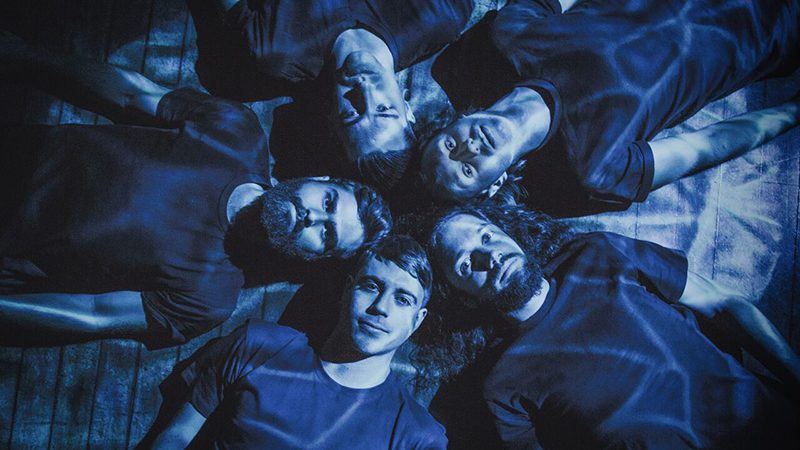 IN HEARTS WAKE are the young guns of metalcore hailing from Byron Bay. Akin to the current monarchs of Aussie metal Parkway Drive they have set the standard for many other homegrown talents.

At first glance In Hearts Wake appear like tie dye shirt-sporting young men, but as soon as they hit the stage they are nothing like the placid type with singles like ‘Traveller (The Fool)’, ‘Badlands’, ‘Survival (The Chariot)’, and ‘Earthwalker’ that features The Amity Affliction vocalist Joel Birch spreading the word about a greener, more conscientious world. I spoke to lead vocalist Jake Taylor amidst the band’s The Great Southern Land tour, hitting up such regional places like Cairns, Port Macquarie, Wollongong, Wagga Wagga, Ballarat, Alice Springs, amongst many others. The band covered Silverchair’s ‘Freak’ for a compilation cover album Spawn (Again) A Tribute To Silverchair that features other Aussie bands like Northlane, Tonight Alive, Hands Like Houses and Ocean Grove.

“We wanted to create a safe space for women to just tear it up and be free and do whatever they wanted to do.”

“We got to put our own spin on it which was an interesting and fun path,” Jake says about the experience of recording Silverchair’s 1997 hit.<

Last July the band released the music video to ‘Nomad’ consisting purely of female moshers spin kicking, headbanging and generally having a good time to some pummelling tunes.

“We wanted to do something different and something that has not been done in this scene, and it’s good when women really get into the music as well, as music is genderless. A lot of women feel like they are afraid that they’re going to get hit or groped because a lot of stories come out, in all genres. So with this music video we wanted to create a safe space for women to just tear it up and be free and do whatever they wanted to do. In some regard they go a lot more crazy [in the pit] than men which is awesome. It was a really nice, beautiful experience.”

As an avid concert attendee, I totally understood where Jake was coming from.

Not many people may know but Jake runs an organisation named Earthwalker Tribe (that produces sustainable goods like hemp shirts and stainless steel water bottles.

“I’m very passionate about the outdoors and I love an adventure whether it’s for an hour or a camping trip. I wanted a space where I can share my own adventures. It’s an interactive hub that people can be a part of.”

In Jake’s parting words, he had this to say about the tour “Expect a few laughs, a few adventures. People often leave with big smiles on their faces, which is fantastic. It is not an aggressive, come-let-some-steam-off kind of thing, it’s quite a joyous event and we look forward to bringing it to Canberra.”