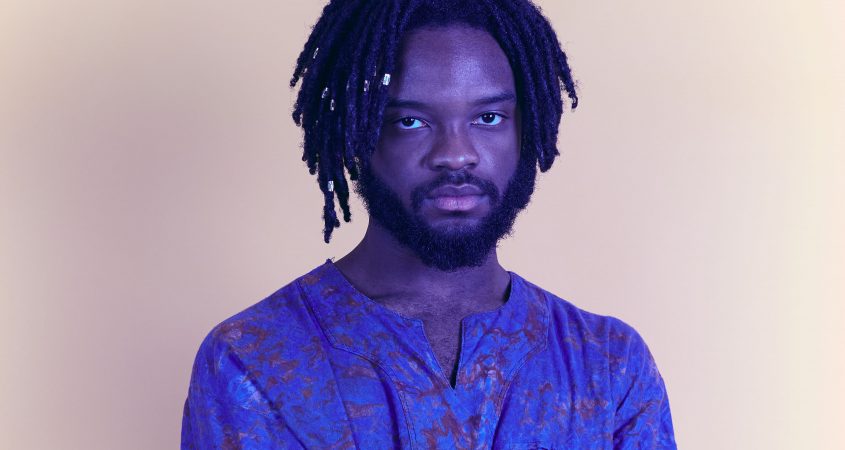 Off the back of a year when he released his debut solo project, GENESIS OWUSU is continuing that momentum with a massive single and his first headline tour. The single, ‘Sideways’, is a massive deviation from conventional rap music, but shouldn’t come as a surprise to listeners given Genesis Owusu’s musical history.

Even considering this, he wasn’t expecting the success it’s recently had.

“I dunno, I was expecting it to be more divisive,” he says. “It’s not really rap, it’s not anything I’ve done before. I was expecting it to be divisive but the reaction has been… good.” The track, featuring Australian ‘multi-dimensional, polyrhythmic gangster shit’ band Hiatus Kaiyote, got Triple J play early on and quickly became one of Owusu’s most popular songs, according to Spotify.

“I’m gonna do everything.”

On working with Hiatus Kaiyote, who have had international success, including a Grammy nomination, Owusu says, “I was a fan, definitely. I just love the jazz influence in general, so it made sense. We recorded a bunch of stuff, and that really stood out.”

Earlier this year, he released Cardrive EP, a collection of tracks he’d been building towards over the past three years. “There’s a direction, and I made it so that you can either listen to the direction or not. There’s songs that just slap, and there’s songs where you can hear the direction. If there was a narrative, it wouldn’t be A-Z, it’s like B-F, there is a line but it’s not the whole thing. It was the contrast, of internal and external, what was happening really. I was in Year 12 when I wrote the EP, so it was like a huge time, the whole ‘you have to do well in all this, this is the rest of your life.’ I was lowkey going through some depression but externally that was when my music started popping a bit, Triple J started noticing, there was a real internal and external contrast and that kinda influenced the EP.”

The EP itself contains a hefty amount of juxtaposition, as well as clear external, non-rap influences. It also showcases his dexterity as an artist, and makes the transition from his early work with older brother Citizen Kay to the recent single much less jarring.

The influences outside of rap music seem to make up so much of the new single, and hint at a new artistic direction. According to the man himself, of late a lot of the stuff he has been listening to is music that exists almost parallel to hip hop, such as King Krule, or otherwise could be cited as being a key influence on the genre itself.

“[I’ve been] listening to a lot of King Krule, Hiatus Kaiyote,” he says. “Lotta old stuff; Marvin Gaye, Nina Simone, Jimi Hendrix, Miles Davis. Try to listen to a bit of everything really, try and get some sort of influence.” While the influences aren’t immediate, and he isn’t making 45-minute jazz epics, what is clear is that Genesis Owusu’s music isn’t the kind of thing you think of if you only listen to rap.

The way Owusu cites these influences affecting him is in a more abstract than direct manner, with it being less of a direct ‘influence’ as much as something he hears and eventually recognises in the music he creates. As he puts it, “a lot of the time it’s subconscious, like I’ll listen to a song by one person and then it might have some kind of subconscious settling, without really noticing.”

To promote ‘Sideways’, and what seem to be further singles he hinted at, Genesis Owusu is hitting the road for his first headline tour. He’s no stranger to touring/live shows, having played support numerous times for local and further afield rappers, as well as playing at festivals such as Laneway and Groovin The Moo, and this experience should show on the upcoming tour. The live show should replicate the album experience, with Owusu planning for it to have “a momentum, where, how the EP goes like chill vibes, goes up, comes back down, that’s kinda how the setlist is, keep that momentum, kind of a narrative.”

On the topic of support artists, he kept pretty quiet, hinting only that it could be literally anything, with a focus on local artists, saying that it could be rappers; “here and there – my influences are kind of everywhere, so I’d like to represent that, might be a metal band, might be a jazz band”.

He also mentioned that he was branching out past the conventional rap sphere of creativity, going from rapper to multi-instrumentalist. “I’m gonna do everything, catch me with a banjo next year. I’m learning keyboard, wanna learn saxophone, that’d be wild. I bought a harmonica.” This would, I feel, translate fucking excellently to a live show.

All in all, Genesis Owusu is still showing why he’s one of Australia’s brightest young acts. He never seems content with one thing, constantly evolving his sound, live show, and general presence in to something completely different from what you expect from anyone else. Although he’s currently only working on singles, to reflect the state of the rap game, when those singles form something cohesive it’s going to be unreal.