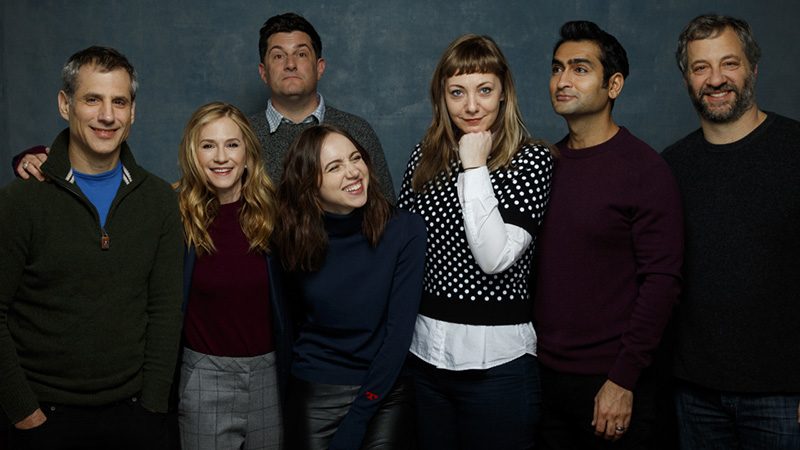 You could be forgiven for thinking, “oh look, another quirky rom com” from the creative hub headed by Judd Apatow, when perusing the flyer for The Big Sick. But you’ll see it anyway because even the beige offerings from the Apatow hive are at least borderline entertaining. And then! You’ll be pleasantly surprised to find yourself watching a film that is neither predictable nor twee. Instead, you’ll be treated to the real life experience of Pakistani born Kumail negotiating obstacles around love, cultural identity and familial pressure.

When Kumail (Kumail Nanjiani) meets Emily (Zoe Kazan) he swiftly falls in love with her. As with all love affairs there are things that get in the way of their happily ever after, namely, Kumail’s legitimate concern that his Muslim parents will not approve of their relationship. When Emily becomes catastrophically ill Kumail realises what he wants and needs, i.e. his family, his career as standup comedian and a ‘love’ marriage (not an arranged marriage), are all completely at odds with each other.

There has been backlash against this film – many people have expected The Big Sick to be representative of a wider cross-cultural experience. It’s not and it doesn’t need to be in order to be good. Instead it tells a semi autobiographical story of one man’s legitimate and interesting experience – a snapshot of a wider cultural experience.

If for no other reason, see it because it is hilarious.

Support Emma Robinson on Patreon!
11% complete
When we reach $500 per month we will begin the official BMA Podcast. This will include interviews with some well-known musicians and artists, tips and tricks for publishing in print and online, as well as other discussion topics around Bands, Music and Arts in Canberra!