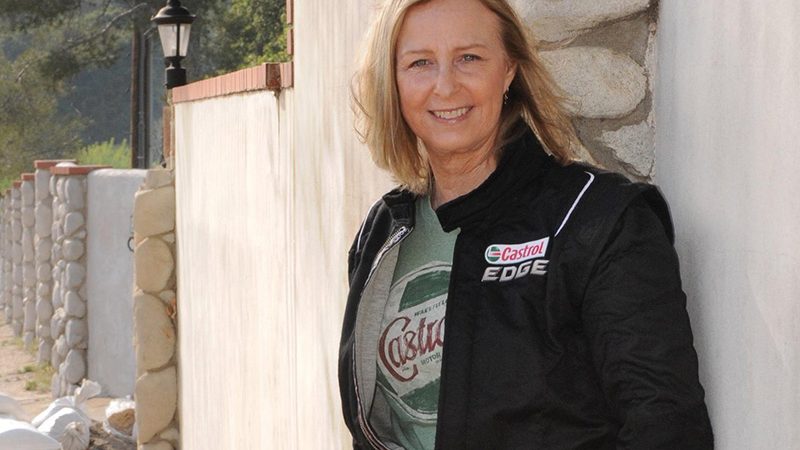 DEBBIE EVANS is disguised as a car seat. In a few minutes, she’s going to join 48 other drivers and smash into a growing pile of cars being dropped from a parking garage. She’ll draw on her vast experience and skill as a driver to make it look like the car doesn’t have one. After a full week of preparation, she’ll coordinate with dozens of film crew and her colleagues to create the sense of complete chaos. Then she’ll probably do it again.

The dichotomy of control and chaos is a familiar one to Evans. She’s a stunt driver, one of the most sought after and respected in the industry. Right now, she’s working on FATE OF THE FURIOUS, the eighth film in the ongoing juggernaut. In their efforts to find new, even more spectacular ways to wreck cars and thrill audiences, they’re dropping a dozen cars out of a parking garage, then smashing more cars into that. That kind of destruction requires a lot of planning to do safely. Earlier, she was in Iceland, testing tyres to give just the right sense of mayhem when a Lamborghini appears to spins out of control. Her job is full of these contradictions.

The massive scene she’s taking part in is one of the film’s key sequences. The villainous Cipher (Charlize Theron) has hacked hundreds of cars and is remote piloting them into a convoy. Thus we are treated to the glorious sight of dozens of simultaneous crashes. The film’s critics and fans would agree that it is a perfect abstraction of the film: a smorgasbord of vehicular destruction without any people to get in the way. However, not only are these remote control cars in the hands of skilled stunt drivers, but they’ve specifically had their electronics disabled. The drivers can’t have the cars thinking for them, they need control, not help. By the same token, they also have their airbags disabled or even removed. If they go off, the driver will lose all visibility, and that’s a much greater risk.

The irony of a scene built on mindless, soulless technology overcoming skill being the product of the exact opposite is not lost on anyone. Evans always drives by feel. In another scene, she and a fellow driver approach a hole in the wall along a narrow road that briefly widens. Her fellow driver has to get from behind her and alongside her, without getting ahead, in a few short seconds. Evans can’t see them clearly, but has to trust them to hit their mark. This perfect stunt, where they’re so close they look like one car, takes up barely a second of the film, yet it took all of their experience and trust to pull off.

She credits her experience on dirt bikes, where everything is unpredictable, and the rider’s understanding of their machine and the terrain must be perfect. Evans is an accomplished competitive rider. Fittingly, Fate’s climatic chase is across an ice field, where those instincts and skills fit perfectly.

Every now and then, Evans’ instincts are off, though not for the sort of stunts you’d expect. She told a story about working on the fairly quiet paranormal thriller What Lies Beneath from 2000. She had to pull up and stop a truck with a yacht on its trailer. It should have been an almost insultingly simple task for Evans. She is, after all, a two-time Red Bull Taurus award-winner and American Motorcyclist Association hall of famer. However, according to the director of photography, she missed the mark by a couple of inches. She redid it. She’d missed it again. The director of photography was working, amazingly enough, with an even smaller margin of error than her. Finally, they rigged up a Christmas light just out of shot to ensure Debbie could hit her mark.

It was a fitting time for that to happen. The early 2000s were the period when it looked like even car crashes might just become a series of 1s and 0s, as CGI went from ‘that thing James Cameron plays with’ to a ubiquitous tool. In another piece of irony, Cameron, with films famed for their outstanding stunt-work, had also pioneered the technology that risked making Debbie Evans’ job redundant. She’d earned the respect and courtesy of the infamously demanding Cameron, and the nickname ‘The Debster’, while working on Terminator 2 as Linda Hamilton’s stunt double. She’d charged through hails of simulated gunfire and dodged real explosions, but the film’s breakout star was the liquid metal villain.

Shortly after though, there were several films that reaffirmed how much better the real thing looks. One of them, The Matrix Reloaded, contains Debbie’s favourite sequence of hers. While the series was famous for its ground-breaking CGI, when it came to smashing cars, the directors accepted no substitutes. The same film that gave CGI Keanu Reeves a close-up also smashed up dozens (or even hundreds) of cars. Evans was front and centre for much of it, driving a Cadillac CTS and, most memorably, a Ducati 996. The first time she saw the completed sequence in the movie, Evans stood up in the theatre and cheered.

She loved how the sequence was conceived, shot, scored and edited all with the stunts in mind. It’s something she wishes more directors understood, that a good stunt requires everyone. It’s one thing to perform it, but someone else has to film it, and then let it be seen in the film. You can’t create it in the editing room or trust to CGI too much. Editing too heavily around it kills the flow and makes us wonder what they’re hiding, and CGI never quite looks right. We know what cars look like, we know what it looks like when they smash into each other, the brain does recognise when it’s faked. The Wachowskis got this, showing every stunt in glorious slow motion, letting us try to spot the seam.

The appreciation of the real thing has sprung back up in recent years, and the Fast and the Furious series has led the charge, doing as much as possible for real, even in the most insane and elaborate sequences. Fate of the Furious is no exception. Avalanches of cars and explosions launching a dozen trucks into the air are done in camera. In a series with chases involving tanks, bank vaults, giant planes and drones (not to mention submarines, as of this latest entry) this is a big ask. Luckily, they’ve got a large stunt team, many of whom have been there since day one.

Evans is one of them. She was responsible for the first film’s key stunt, a Honda Civic Coupe swooping under a speeding semi-trailer, done completely for real. Less than a year after What Lies Beneath she was back doing what she was good at, producing a stunt that appeared in every trailer. It’s amazing how small scale it feels given where the series is now, but the fact that the key stunt in the first film is nothing but skill, coordination and timing has helped define the series. Skilled driving seems to be the one thing that doesn’t change no matter how big the films get. It’s fitting that two of Fate’s sequences are, by the standards of the series, grounded. An extended street chase through Havana and another through New York make the centrepiece the skill of the drivers and the mastery of their machines, rather than elaborately coordinated insanity. The latest film is simultaneously the climax of the series (at least until the next one) and a return to its roots.

Debbie Evans likes it like this. Disguised as a car seat, she isn’t worried about being seen. She wants the stunt to be seen, the art and craft of it to be appreciated. Sure, she gets to drive cars like a Corvette Stingray (her favourite car that she’s got to drive) but it’s the skill it takes to use it that matters. If you need proof, the films started with the characters driving cheap, customised imports, and are now wrecking Lamborghinis, yet the drivers in those cars are the same people. What you can do with the car is what matters. That’s why the audiences are there. That’s what Evans wants, it’s why she’s happy to dress up as a car seat. As the cars collide, their parts flying across the screen, the high definition capturing every spray of glass and piece of debris to the roaring approval of the audience, it would seem she’s not alone.

Fate of the Furious is available now on digital, Blu-ray and DVD.

Liked it? Take a second to support Jasper Hagan on Patreon!

Support Jasper Hagan on Patreon!
12% complete
When we reach $500 per month we will begin the official BMA Podcast. This will include interviews with some well-known musicians and artists, tips and tricks for publishing in print and online, as well as other discussion topics around Bands, Music and Arts in Canberra!