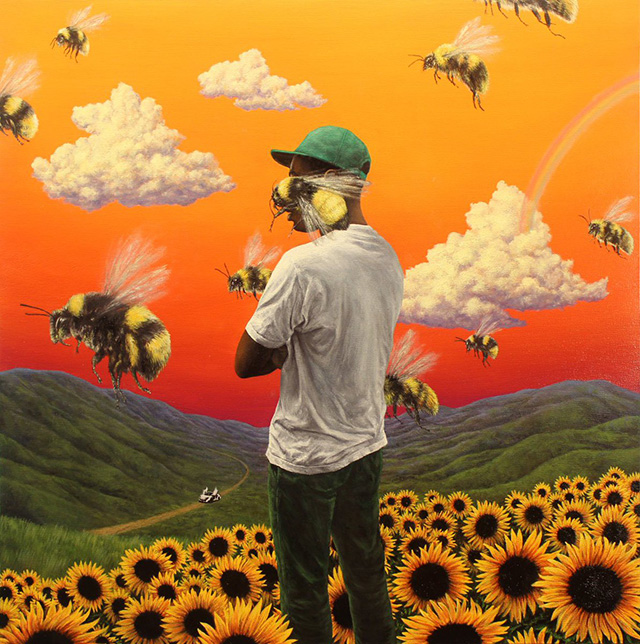 Every Tyler, The Creator album is distinctively a Tyler, The Creator album. The Odd Future founder has a distinctive sound that can be traced from what makes up the beats to his unique, captivating, gravelly voice. Flower Boy is a Tyler album in the vein of his previous four releases. So where’s the plethora of praise for Flower Boy coming from, considering Tyler’s mile-long track record, including a ban from Australia and the United Kingdom?

Make no mistake, previous criticism of Tyler and what he’s represented is warranted. Any Google search for his lyrics will make even the most seasoned rap listener cringe, and without going into any intricate detail, it’s the recurring – and graphic – violent lyrics that can be both sexually and ethically questionable, to the point where it makes the listener question whether or not they should be listening to it. Attempting to remove Tyler from his own controversy is futile, as it has been so instrumental to his success. The controversy brought the fans, the fans brought the success, and at that point it seemed like Tyler was struggling with attempting to strike a balance between making the music that dealt with his inner self and continuing with the controversy that brought him the success in the first place.

Emotional openness has been a huge part of Tyler’s music since his debut 2009 release, Bastard. On the record, structured like an interaction with a psychiatrist, Tyler is open about his personal issues, and his bastard side, including the introduction of oft-recurring other personality Wolf Haley, which seems to be the persona used when delivering these particularly violent lyrics. Through these means, Tyler could address themes such as depression and mental instability in a way that still appealed to his target audience, though the choice of lyrics was always in question.

Flower Boy is unquestionably about growth. It’s implicit in the album title, as well as devices used throughout the narrative to deliver the point to the listener in a way that is none too subtle. Flower Boy, in and of itself, is a title that paints Tyler as someone who has grown and blossomed. In addition to this, references to plants and gardens are littered throughout the album, with tracks ‘Droppin’ Seeds,’ which as a title is likely as much about Tyler creating a fan base, as well as ‘Garden Shed,’ which seems to be used metaphorically for a place to come out of.

Additionally, Tyler uses frequent vehicles to reference going places, both literally and metaphorically. This is established early in the album, on the first track with, “How much drive can I have, until I run out of road? How much road can they pave until I run out of land?” This is the first indicator of Tyler looking at his personal growth, as in, he’s looking to see just how far he can go. This theme is constantly referenced throughout the album, most obviously on ‘Potholes’, which discusses the obstacles in Tyler’s life that he needs to swerve around. At other points on the album, Tyler uses the car motif to reference driving away from problems, almost crashing, and switching gears allegorically to represent his life.

This album does show a new, improved and mature Tyler, The Creator. The key difference between his previous releases and Flower Boy is that on this album, he channels his significant creative ability in a positive, not controversial manner and ends up creating a stellar album. Towards the end of the album, he starts referencing the car breaking down, and the fact the album is titled Flower Boy gives the impression that Tyler might have finished growing, or reached his destination, whether he likes it or not.