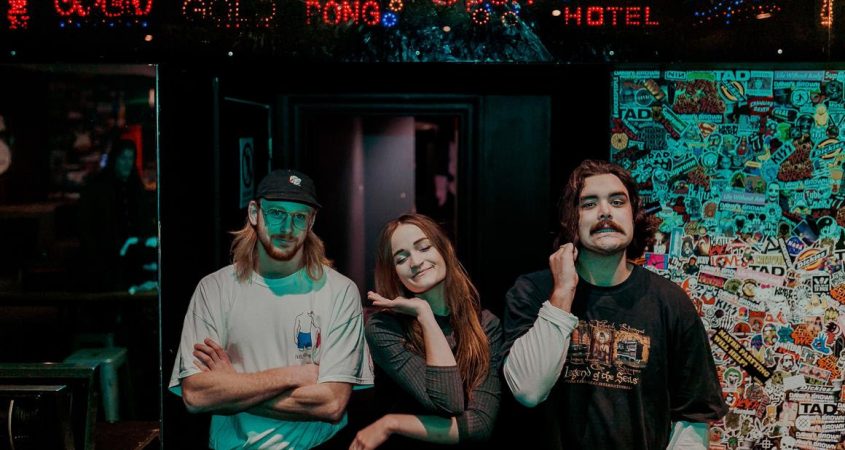 ‘k bye’ tells a tale of adolescent debauchery, engulfing the listener in an atmospheric haze reminiscent of a suburban house party. Recorded in a Newcastle basement by close friends Fraser Marshall and Jack Clark, and mastered by Steve Smart at Studios 301 (Flume, Empire of the Sun), ‘k bye’ captures the raw energy of the Newcastle-based trio’s notoriously wild live shows.

Frontman Joab Eastley describes the inspiration and story behind the song: “The track was inspired a few years ago at a Newcastle house show – when I was a much younger, much more naive version of myself. It was a Sunday night, I had work in the morning, so I was just stopping in on my way home. It’s subtly opening a dialogue about the inextricable links between illicit behaviour & underground youth subcultures – all wrapped up in a neat little party track. And no, the irony isn’t lost on us.”

The band’s most recent single, ‘2 U xoxo’, garnered strong support from the likes of triple j, FBi, MTV, key Australian blogs and the Hype Machine blogging community. In between recording and releasing new music, the band have maintained a strenuous live schedule, playing Mountain Sounds Festival 2017 and performing alongside the likes of Hockey Dad, Winston Surfshirt, The Gooch Palms, Polish Club and Skegss to name a few.

To celebrate the release of the new track, RAAVE TAPES will traverse the country in October performing in Brisbane, Perth, Sydney, Muswellbrook, Wollongong, Canberra and Melbourne, initiating new bassist Lindsay O’Connell into the band. The trio have also teamed up with local sponsors to produce a mini-festival in Newcastle on Sunday August 20, aptly titled RAAVE TAPES Shut Down The Argyle House, featuring twenty artists across three stages, including Good Boy, VACATIONS and Kwame.

The accompanying music video and additonal tour dates will be released in the coming weeks.