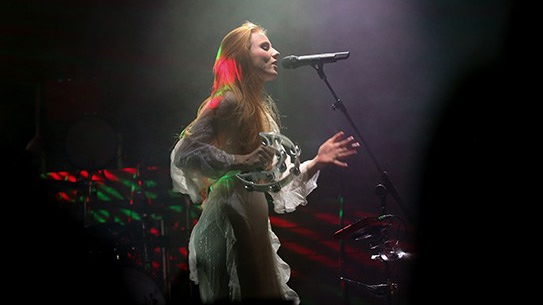 I’m not much for clubs, so I hadn’t stepped foot inside Academy before Friday night. “It’s nicer than I imagined it”, I thought as I descended down the staircase into the main venue. There are little alcoves that enterprising gig-goers had already snapped up, while the back half of the room is a step up from the front, meaning those at the back have a surprisingly good view of the stage, even if you’re not the tallest.

The night was ably kicked off by Lakyn, who played a mellow, vibey set for the earlycomers. It’s Thandi Phoenix who really got the party going though, with a wonderfully paced, vibrant set that had people cheering between songs. She and her band have a charming rapport going, and it’s a lot of fun to see her take over keys for a song, before taking her place back at the microphone.

The smoke machine kept pumping, the disco balls kept spinning, and the audience kept pressing as close in as possible until Vera Blue finally arrived to take the stage, to rapturous applause. A club seems like a strange choice for Vera Blue, but let’s be honest – she could play any venue, really.

She was completely magnetic – ethereal, charismatic and it’s impossible to take your eyes off her as she shows off her impressive vocal range, busting out enough songs to please old and new fans alike – particularly new single ‘Mended’, which the tour is in support of.

As she performs, she gets lost in her own music, and it’s easy to follow suit. ‘Mended’, like many of her songs, is imbued with such intensity and passion that you can’t help but lose yourself. The sold out venue was packed to the brim with punters singing along, dancing and having a close-to-spiritual experience.