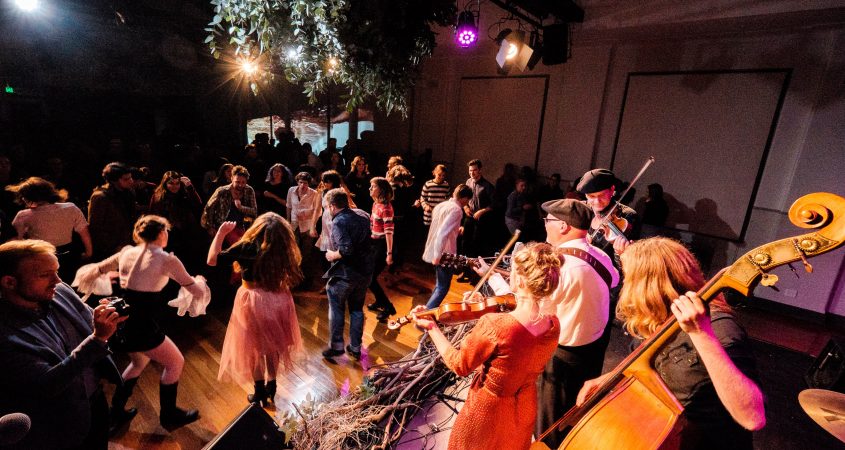 Ainslie and Gorman Arts Centres continue to shine a light on Canberra’s arts community with their next winter art party, CANBERRA OBSCURA: METROPOLIS. Described as an art playground with drinks, food, music, performance and comedy, Canberra Obscura: Metropolis aims to unearth Canberra’s experimental side. The mantra? Expect the unexpected.

BMA caught up with Ainslie and Gorman Creative Producer Adelaide Rief to discuss the focus of the art party, and what attendees should buckle in for. “This year it’s called Canberra Obscura: Metropolis and for me the idea of a metropolis is like a really dirty, gritty place. But at the same time, the city is a place of electricity, light and possibility as well.

“The theme is a bit obscure,” she laughs. “It’s the idea of heaviness, something that’s been interesting me. It feels like we’re living in pretty heavy times – weighty times. You know, pressurised political life, a lot of production of things and objects that we might not necessarily need, there’s a lot of conversation about things that we’re digging out of the ground that maybe we don’t need to be, like coal. It’s a very abstract way of talking about a lot of different contemporary issues or ideas that are floating around at the moment.”

“It’s designed to be both a reflective and contemplative space but also a space of enjoyment.”

The idea of Canberra as a metropolis raises some interesting questions, Adelaide says. “We’re asking ourselves if Canberra is a metropolis, or if it’s just a tiny town. It’s kind of like the little city that wants to be a big city, or the little town that could. It wants to be a metropolis, maybe it’s not,” she notes. “But also, when you see Canberra from a distance, it is a little metropolis popping up out of the bush. It has that contrast. We’ve got this incredible, brutalist concrete architecture here, and it’s a place where politics happens, so it’s heavy in that way.”

It sounds like a loaded theme for a Friday night party, but thankfully the event won’t be quite so foreboding. “I don’t want [the guests] to feel like they need to feel anything. It might be that they just really need to get a beer and have a bit of a sit down,” Adelaide explains. “I suppose it’s a place of exploration, to see things that you might not normally see or to see things from different angles – to have the opportunity to play, as well; to step out of the cold and into an environment where you don’t have to behave in a super straightforward manner. It’s designed to be both a reflective and contemplative space but also a space of enjoyment, having a bit of a boogie at the end of the night.”

It wouldn’t be an art party without some of Canberra’s creatives on the floor, and thankfully the talent will be some of the city’s best. “A lot of what this is about is showcasing the energy and the diversity of creative activity that’s happening at Ainslie and Gorman Arts Centres. So, Alison Plevey, who is the director of the Australian Dance Party, she’s working with a group of collaborators to present a work called Which Weigh,” Adelaide explains. That dance group is known as CO.LAB, and they’ll be presenting a multi-arts improvisation experiment. “We’ve got Rosanna Stevens, she’s a writer and a comedian and she’s going to be reading a piece about the experiences of women in space. There’s a bit more to it, but it’s going to be quite funny.”

Guests will also find themselves enjoying a set from one of Canberra’s favourite up-and-coming bands, Moaning Lisa. “They give us the opportunity to experience collective angst and maybe release that angst as well,” Adelaide says. Connoisseurs of all things dance music will have Coolio Desgracias to look forward to. “I love his output as an original musician, with Coolio and Housemouse, the stuff that they do there is really playful and very local. But he also plays mega DJ sets and just has this epic vinyl collection. So he’s going to be playing a set inspired by electro-synth-pop, a little bit of industrial, heavy – those sorts of vibes.”

Considering the diversity of talent and creativity on display, it’s an event that Canberrans should get along to. “It’s a taster of all the different, interesting things that are happening in Canberra’s creative communities at the moment,” Adelaide says. “You’ll get to have something nice to eat, we’ve got cocktails and good beer, and it will all be a lot of fun.”

Canberra Obscura: Metropolis goes down at Ainslie Arts Centre on Friday July 28 from 7pm. Tickets are $20 + bf at agac.com.au, or $25 on the door.

Support Andrew Nardi on Patreon!
11% complete
When we reach $500 per month we will begin the official BMA Podcast. This will include interviews with some well-known musicians and artists, tips and tricks for publishing in print and online, as well as other discussion topics around Bands, Music and Arts in Canberra!