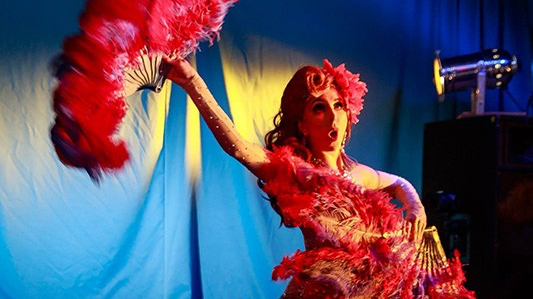 The second of Jazida’s quarterly variety shows featured burlesque, belly dance, salsa, fan dancing and boylesque. 80 very happy patrons packed themselves into the sold-out small venue to settle in with their drinks and enjoy the two hours of performances.

Emcee Jazida was elegant and chatty and looking utterly glamourous in her $12 “second-hand shopulence” black gown. The first set opened with Kokoloco Dance School presenting an American style cabaret showgirl group routine in a salsa styled Charleston that was flirty and fun. They later performed a second routine full of bumps and shimmies and their almost perfect timing was a real pleasure to watch.

2017 Burlesque Idol winner and Canberra local Rainbow performed twice, starting with her well-known ‘cheap wine’ cold chisel routine and her second act as Patsy from Ab Fab was insanely funny and over the top. Pulling a cigarette and phone from her underwear, she ended the routine by pulling out one tit and doing this insane backbend to tassel twirl. It was spectacular and hilarious and the crowd loved it.

My favourite routine was Canberra local Robbie. He performed a very simple but highly quirky undress routine; removing his three-piece suit in a naughty and camp style, he stripped completely nude using his briefcase for modesty and it then ‘accidentally’ falls open to reveal a sketched portrait of his genitals. The crowd roared their applause.

Thank you Jazida – myself and the crowd were very entertained and I think that was your best show yet.