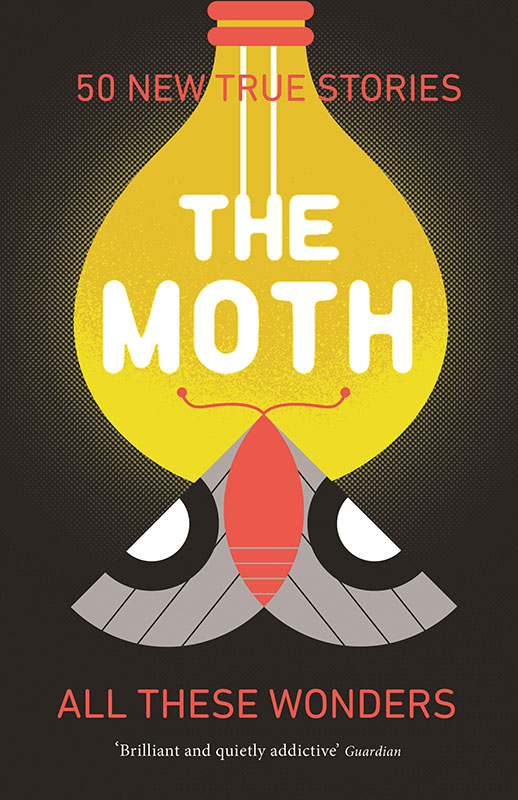 “When I was fifteen years old, I lived for a while in a mausoleum … I was desperately in love with a girl who was dead, and with a man who was living but psychotic.”

It’s crazy how much suspense can be packed into the literary equivalent of a mate’s tall tale. The Moth, a not-for-profit founded by George Dawes Green, has sought out and curated tales from the extremes of human experience. They are harrowing, hilarious or deeply sad; but whatever notes they hit it’s with wrecking ball force.

It’s a collection of transcribed … performances, I guess, although they’re not your regular theatre, not quite an interview, or a live reading either. It’s storytelling stripped back to viscera and bone. One person, one microphone, one true story. And they’re addictive as fuck.

Some of the contributors are known personalities – Magda Szubanski, Louis C. K., John Turturro. Others are merely incredibly interesting. Like the journalist who lived undercover in North Korea as an evangelical Christian. Or the NASA astronomer who spent a decade of her career tracking the New Horizons spacecraft, only to have its onboard computer crash three days before it finally reached its destination of Pluto. Or the hotel manager who was hustled by the FBI into luring an oldschool gangster out of his rooms.

In all fifty anecdotes there’s not one yawner. I was power-hoovering these stories in with the kind of brainless enthusiasm most of us bring to jamming two thirds of the popcorn up our faces before the trailers have ended. There’s literally (yes LITERALLY) nothing to dislike about this book, or anyone I wouldn’t recommend it to.

All These Wonders uses the directness, brevity and familiarity of a friendly conversation to navigate the reader across rocky emotional terrain, perilous more often than not. Although the rapport between storyteller and audience is somewhat diminished by freezing a live performance in written word, the stories retain their energy and authenticity. Even the smallest crises and triumphs are compelling because they’re real, the people are real and they’re brave.

The full spectrum of human ingenuity, fear and resilience is on display. It’s the sort of reading that makes you question what really constitutes a normal person, and how normal the people around you really are. You may find yourself looking at friends and strangers alike wondering for the first time what is untold or what potential’s untapped under the skin. Or you may be looking in the mirror, for that matter.