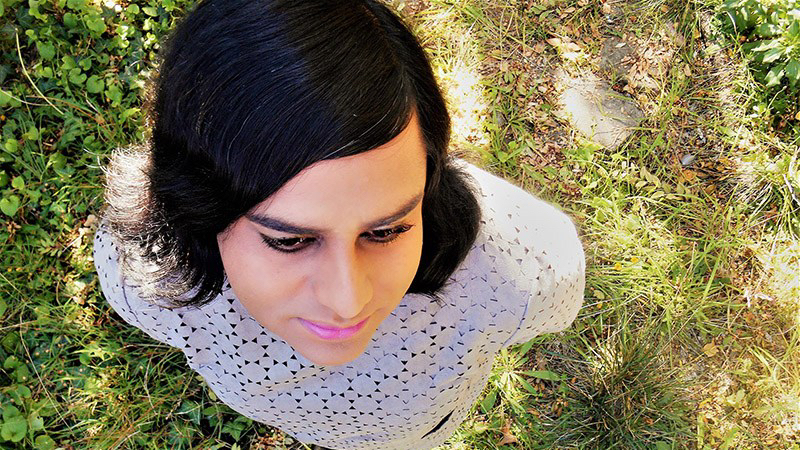 Fresh from making noise with the likes of Agency, Oranges and Tangents, Canberra’s own prolific musician Shoeb Ahmad returns to the stage to launch “mask-ed”, their first solo release since 2012’s Watch/Illuminate. A minimalist soul trip with lush harmonies and slow grooves, “mask-ed” narrates the struggles of true identity and secrets kept around gender expression.

“mask-ed” is the debut single off “quiver”, Ahmad’s forthcoming album and first in half a decade. Ahmad sent in some of the songs that influenced “quiver”, which you can listen to below.

Shoeb Ahmad will launch “mask-ed” at Gorman Arts Centre on Saturday July 8 at 6:30pm. The launch will also feature sets by Sydney musician Naif (formerly of Hannahband) and Canberra post-punk trio Wives, playing one of their only shows of the year. The evening will kick off with a panel exploring the role of identity in creative practice, featuring Ahmad and close collaborator Hannah de Feyter (ALPHAMALE, Vinegar Tom), along with Naif and members of Wives. Tickets at Eventbrite.

The Go-Betweens – Twin Layers Of Lightning

There’s a few broad themes musically with “quiver” but one of the things that resonated most with me was a vibe that I wanted to make an ‘adult contemporary’ record, something that was stately and sophisticated to me, but could also be called ‘easy listening’. As a fan of The Go-Betweens, one of my favourite things about them was that after all the critical acclaim from the ‘80s alternative underground, they received their only ARIA Award in the ‘00s for Best Adult Contemporary Record. It made me think how that tag line has such cringe worthy connotations but by definition, it should really be a broad-church.  This one sits right in the middle of my personal fave Liberty Belle And The Black Diamond Express, matching Robert Forster’s charming wit to a lounge-y downtempo setting.

PJ Harvey – Horses In My Dreams

There’s many things about the music of PJ Harvey that I love but the thing I most I admire is her passion in shifting gears with each record, be it with the feral intensity of the early albums with a power trio through to the more stark gothic folk rock of more recent albums. The album from which this track is from (Stories From The City, Stories From The Sea) is pretty polished and has a studio sheen that may age badly but the songs from it are so solid and range in emotional power. This one is very weightless, gentle but also brooding in quiet intensity.

Tindersticks – Say Goodbye To The City

Tindersticks are a band who seem to be routinely written off as a budget Bad Seeds but I’ll be dammed if they aren’t much better than that crew these days. Personally, I’m a big fan of the soulful grooves they work up and the textural elements they’ve brought alongside the live instruments on the last few album but this one is originally from Waiting For The Moon, the first one of theirs I bought and the last before they took a break and then reformed again with a changed line-up. This version is a re-recording that swells and pushes time with the layers of horns and vocals coming in and out, anchored by a solid rhythm section.

Blonde Redhead – Misery Is A Butterfly

This band holds a special place for me, one of those groups I discovered in my DIY noise punk infancy and then going on the journey with them as they went off on tangents in their song-craft. This track and the album that is titled after it came out of left field for me, still maintaining their connection to their past in the collaborations but musically, on another level to anything they had done previously. The more familiar noise squalls from their earlier albums have been replaced by lush orchestrations, chord bluster through noise and distortion now heard through tremelo strings and languid keyboards.

I could have picked something by Tricky – an artist who also played with notions around gender in their music – or Portishead but this track by the very under-rated For Carnation (led by Brian McMahan of Slint) I think is on point with subtle song-writing – the artfulness of slow melodic movement and near stasis of harmonic textures that can pull at the heart strings without one even knowing. In particular, I love the hushed duet by McMahan and Petra Haden, something gets me about the delicate balance between their voices, both warm and mysterious at the same time.

As I wrote the music for “quiver”, I seemed to be turned onto a lot of early 70s stuff from Roy Ayers, Curtis Mayfield and The Temptations. The warmth and spaciousness that can be heard on their records from this period is astounding, very psychedelic and worlds apart from classic “soul” artists like Aretha and Stax. I wanted to capture this as I started recording, finding the sound of the room the sounds inhabit but also made me think about how I wanted the words upfront and delve head first into vocal arrangements, something I certainly was a stranger too! It goes to show how a well worked arrangement and studio trickery can put the voices down the middle and shine whist being innovative in its song-craft.

Luke Sutherland is a wonderful person, happy to be working away on his own thing without much fuss. As an admirer of his work, he covers many bases in my life – live performer with Mogwai, an outstanding novelist who tackles two themes close to my heart – race relations and gender as a life force – but as a songwriter, he really draws on his skill of writing narratives to take the intricate music he makes to the next level. He wrote a song called ‘Pele’ with his old band Long Fin Killie, which struck a chord with me in its inner questions and pressures around being a footballer AND a crossdresser but I’ve gone with his imagined bi-racial romance between the greatest boxer ever and the widowed Jacqueline for not only its lyrically imagery but also the pillowy clouds of vocals, mellow hip-hop shuffle and twilight string parts.

A genius that is missed every day. The songs of Sparklehorse will never cease to be irrelevant, so strong and powerful was Mark Linkous with his left of centre pop magic. Without fail, I will always cry when I hear this – so brutal in its vulnerability, heartbreaking in its melodies. All the songs on “quiver” are the first time I’ve exposed myself through words but if I could make songs that were seen as brave and honest as Sparklehorse’s, I would be very honoured.