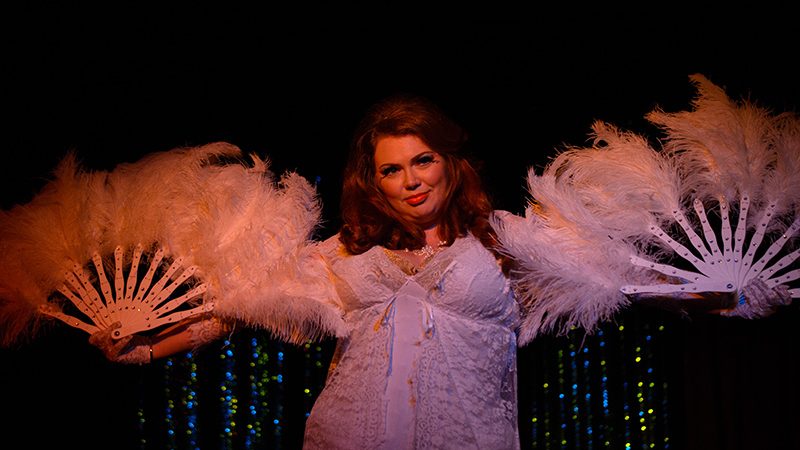 This sold-out show by Miss Kitka’s House of Burlesque was themed on Grindhouse; the old-style American exploitation movies from the 1970s. 100+ attendees settled comfortably into group tables, whilst snippets of movies played on the projection screen to give those that didn’t know what they were about to see some idea of the theme.

Emcee Garnet Martini (as Chesty Morgan) was very coy and witty. Introducing each act with a history for each performance, she also performed a hilarious scene from Deadly Weapons, using her 73-inch bust to kill the mobsters that murdered her boyfriend. Drugging the men she then smothered them to death with her ample bosom. The crowd’s hilarious reaction was fantastic.

Other Grindhouse performances included a Tura Satana tribute from Faster Pussycat Kill Kill that morphed into a Cherry Darling Planet Terror sequence. With leather, chains, a shotgun fake leg and a zombie baby wielding a shot gun, it was in-your-face Kapow! and as sexy as Tura was. There was also a Barbarella routine with lots of silver spandex, lava lamp lighting, laser gun and star pasties, and a gender queer strip performance to a spoken poem, ‘Two Loves’ by Lord Alfred Douglas.

More performances included a flapper routine, a biker chick fight over a man featured a real Harley Davidson motorcycle as a prop, a flirty striptease behind a lace curtain, a fan dancer who morphed into a PVC-clad rock chick, a house wife bump ‘n’ grind routine that revealed a suitcase full of fetish sex toys, a Dita Von Teese lookalike that wore a strap on AK47 gun and an epic three-minute tassel twirling group routine with light up LED tassels and shimmying go-go dancers.

It was sassy, sexy, high impact and utterly brilliant. The crowd loved it and performers presented routines that were controversially oversexualised and wow this show did not disappoint! Excellent work Miss Kitka.

Support Sam Ingham on Patreon!
9% complete
When we reach $500 per month we will begin the official BMA Podcast. This will include interviews with some well-known musicians and artists, tips and tricks for publishing in print and online, as well as other discussion topics around Bands, Music and Arts in Canberra!