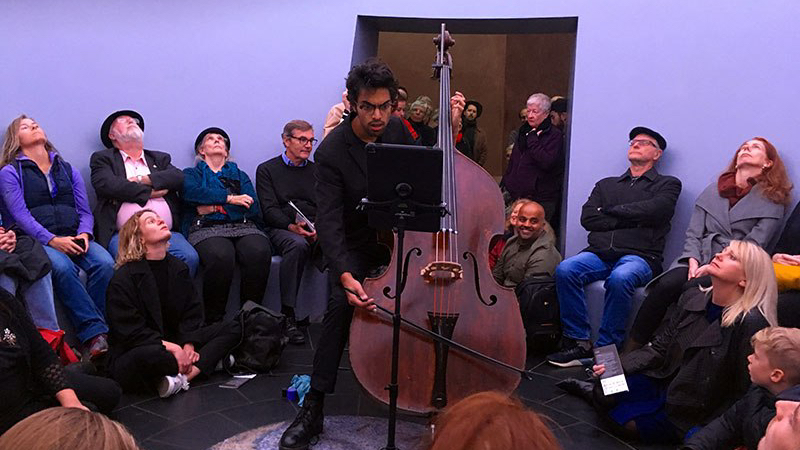 A tightly-packed circle of believers. Their faces turned up to a flat disk of infinite depth, floating in a burning sky. Time started up again, the dome was filled with a terrible enveloping sound – part shriek, part rumble. That moment, when you wake from within total submergence of a gig, like from an intense dream.

Benjamin Drury’s ten-minute composition, commissioned by the Canberra International Music Festival, was written for double bass and voice, to be performed in the James Turrell Skyspace during sunset.

I turned up early to find the dome empty except for the sound of trickling water. Gradually the audience arrived in small, hushed groups. The space had a reverence, like we were sitting in a church of art waiting for a sermon. The faithful masses were spilling out around the dome by the time Rohan Dasika was in place for the sunset performance.

The piece started gently, Dasika bowing a long and low note, pausing … and then repeating the same long, low note. He began singing meditative wordless “arrs” in unison with the bass drones.

Gradually, Dasika’s voice broke free from the persistent bass drones to sing a slow, sparse melody, the pauses filled with the sound of the domes trickling water.

We sat looking up at the changing sky, the composition unfolding around us. I forgot about the music. The universe was one.

Suddenly, the cogs of the cosmos began grinding, a new big bang, the bass exploded into screeching, beautiful, terrible awesomeness!

And then the calm of a small high melody told us “it’s okay, everything is okay”.

Liked it? Take a second to support Jonathan Dolezal on Patreon!

Support Jonathan Dolezal on Patreon!
7% complete
When we reach $500 per month we will begin the official BMA Podcast. This will include interviews with some well-known musicians and artists, tips and tricks for publishing in print and online, as well as other discussion topics around Bands, Music and Arts in Canberra!