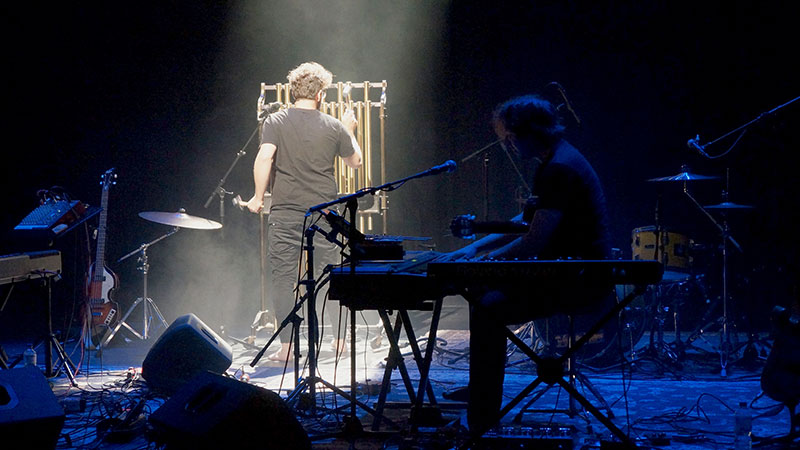 I first heard about Tubular Bells For Two five years ago when my father-in-law saw the show. It seemed to rekindle the spirit of ‘73 in him. He asked me to return the copy of the original I had pilfered from his record collection and I have since caught him air guitaring and air conducting along with the record a few times.

The concept is simple enough: two musicians use loop pedals to perform Mike Oldfield’s Tubular Bells. The implementation is complicated, athletic, funny and equal parts impressive and fun to watch.

Aidan Roberts and Daniel Holdsworth began stage left and right, each surrounded by their own island of instruments, looking away from their playing only briefly to make eye contact for cues. By the end of the first set they were dodging around each other and swapping instruments in the midst of their self-imposed logistical nightmare.

They were also very funny. Holdsworth found time for a relaxing glass of wine during some looped downtime for himself, while Roberts continued furiously plugging away.

Compromise is expected when loop pedals replace musicians, especially since these guys don’t use any pre-recorded material! However any small compromises to the composition was well covered by their showmanship and the great sounds they were pulling.

Liked it? Take a second to support Jonathan Dolezal on Patreon!

Support Jonathan Dolezal on Patreon!
11% complete
When we reach $500 per month we will begin the official BMA Podcast. This will include interviews with some well-known musicians and artists, tips and tricks for publishing in print and online, as well as other discussion topics around Bands, Music and Arts in Canberra!