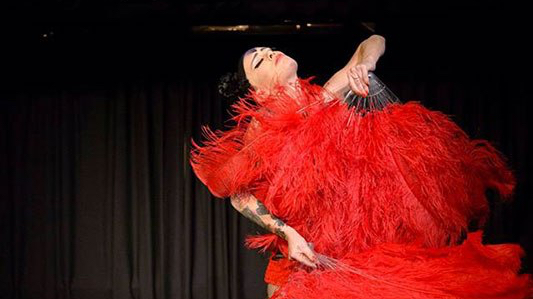 Holly J’aDoll (Sydney) emceed this sold-out show presented by Miss Kitka’s House of Burlesque. With a history of performing with some of the troupe, J’aDoll had some fond memories to share on the night as well.

Major Cry debuted in a dress suit with long tails. After a sexy strip routine on a chair with a great stocking peel she finished by drinking a glass of whiskey and sashaying off stage.

Cherry Sunday performed a cabaret number from Chicago, doing the Charleston in a sequinned dress, she stripped with a fantastic solo breast tassel twirl and lots of kicks. It was high impact and fun.

Rusty Blaze performed a balloon pop strut routine in a full bustle skirt and corset. Popping balloons with a large feather, she stripped to tassel twirl and popped a balloon overhead that was full of glitter and feathers.

Domino Envy performed a punk-styled routine where she appeared out of a delivery box dressed in black PVC. She bopped around the stage and, luring a man into her box, she sealed their fate.

After a brief intermission the show returned with Heidi Treasure, in long flowing robes she stripped them off to reveal pasties and peacock bustle tail that she lifted up behind her in a gorgeous tail display.

Esmeralda Delight performed as a Woodstock lovechild, deliriously floating about and stripping to morph into the white rabbit from Alice in Wonderland. With the theme of the “eat me, drink me” hallucination segment it worked really well.

Poppy Avalon performed a sassy routine dressed in a business power suit. Dancing in a contemporary style she stripped out of the suit to reveal blue sequinned hot pants and a fringed bra.

Sparklemuffin performed wearing a Roman-styled suit of armour covered in empty pill packets. Stalking the stage and holding a stave club covered in LED lights, they stripped to reveal band aid pasties and a nude G-string that suggested vulnerability. They turned around to reveal text on their back saying, “I am not my illness”. It was a brilliant way to draw attention to the battle of living with mental illness.

Mandy Bandersnatch performed her Captain America routine, dressed like a cheerleader in the colours of red white and blue she marched on the spot and then stripped to perform an epic tassel twirl.

The final routine by Possum Galore, The Feral Tease drew howls of laughter and massive applause from the crowd. Dressed as a giant cockroach she mourned the death of her partner cockroach and, once stripped, she fan danced to ‘I Will Always Love You’. Then, in the style of Romeo and Juliet, she sprayed herself with insect spray to die and join them.

With a bunch of group routines spread through the night featuring go-go dancing, audience lap dancing and a gangster-styled striptease, boylesque performer Johnny Pash debuted in a show that was sultry, sexy, significant and a lot of fun. The crowd seemed to really enjoy it.