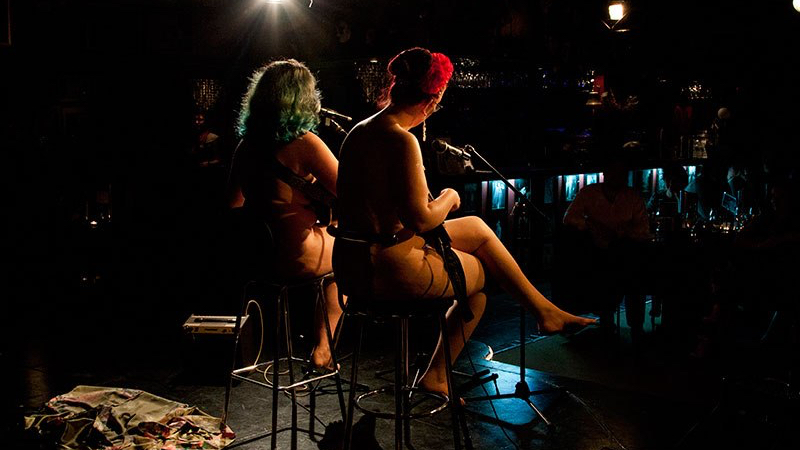 With a wave of events in Canberra recently focussing on the strength and sisterhood of girl power and feminism, this sold-out event showcased some wonderful and amazing routines that both pleased and shocked. It was controversial yet fantastic. Belle Bleu emceed the show with a strong verbal theme of “hashtag consent”. Grrrlesque brought a fierce range of performances to the stage, focusing on all the main issues that are managed daily including repression, sexuality, beauty standards, financial equality and politics.

Performances included Fi Bionnachi performing a punk stomp routine to No Doubt’s ‘I’m Just A Girl’; a very 70s-styled cactus peyote seduction routine was performed by Lady Bird Blue (Melb); and Sparklemuffin performed their excellent butch road worker routine; Sparkles performed two food fetish routines – a hamburger routine where she pulled the ingredients out from all sorts of places and a fairy bread routine that involved smearing margarine all over her body before smothering herself in sprinkles.

Ursula Wolfe performed a controversial routine about beauty standards and plastic surgery. Whilst empowering yourself to “F” the standards, she proceeded to perform surgery on herself and shame the beauty industry. Bunni Lambada & Clint Beastwood (Syd) performed a high impact 70s-styled duo fan dance routine, then Belle Bleu and Ivy Ambrosia came out, de-robed and played and sung two songs on their ukuleles in all their naked glory.

After a good intermission, Inkbits opened the second set and sung and stripped to ‘Beautiful’ by Christina Aguilera in her gritty alternative style that we all love to watch. With the words “Bitch Dyke Fat Ugly Intense Mysogynist” written across her front torso, the highlighted letters spelt “Beauty” down her middle. Ivy Ambrosia then performed a type of Barbie girl routine where she cut off her body stocking and mask to reveal her inner self, and Belle Bleu returned to sing Conchita’s ‘Rise Like A Phoenix’.

For the finale, Bunni Lambada came out wearing a suit and Trump mask, covered in balloons with political words written on them, she danced and popped the balloons, then ripping it all off she recited a long political piece about injustice, sexism and ignorance. It was heavy, poignant but significant, and the entire room was dead quiet as they listened intently. As I left I couldn’t help wondering though – does growing out your armpit hair and wearing combat boots instead of heels for a show make you a feminist? Thanks Sass and Tease. I thoroughly enjoyed the entire show.