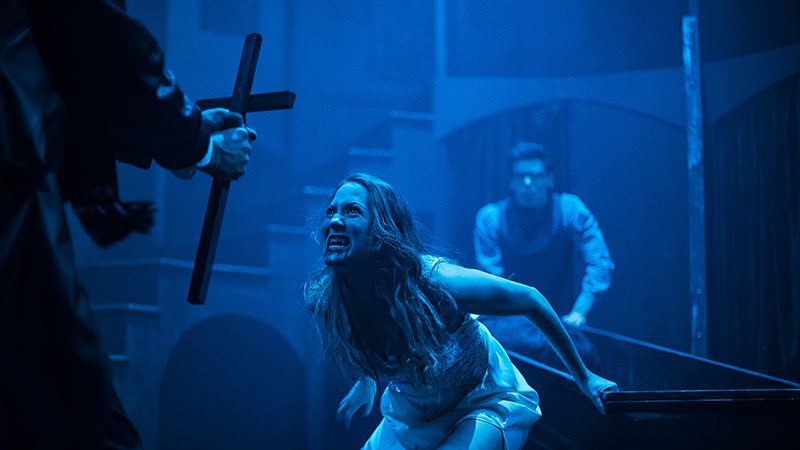 When Bram Stoker’s blood-curdling gothic masterpiece DRACULA was published in 1897, it didn’t have too heavy an impact. It wasn’t until a list of filmmakers adapted it in the 20th century that the haunting, castle bound Count Dracula was solidified in popular culture and folklore. Defining almost all of the characteristics we now associate with undead bloodsuckers, Bram Stoker’s novel wasn’t the first to introduce vampires, but even today it is the primary text on the subject.

It’s also the source material for Shake & Stir Theatre Company’s latest adaptation. Reinspired by artistic directors Nelle Lee and Nick Skubij, this theatre production promises to be a torturing, faithful retelling of the original with a few modern twists. To unravel more, BMA caught up with actor Adele Querol, who has been cast in the production as Dracula’s underling, Lucy Westenra.

“[Lee and Skubij] really wanted to do something that was honest to the story, because they discovered that no one really knew what the story was in the first place,” Querol tells me. “Everyone knows that Dracula is a vampire, right? But no one really knows the story of Dracula.” It almost creates a new shroud of mystery around Dracula, that his story can exist for over one hundred years and yet people today know little more than his name.

“My first contact with the full Dracula story was through reading [Lee and Skubij’s] adaptation of the script,” Querol says. “To be able to condense an entire novel into a 90-minute adventure extravaganza … to be able to do all of that, and keep incredible production values to take on a big national tour, I knew straight away that it was something I wanted to be involved in.”

Dracula begins with Jonathan Harker, a lawyer sent to conduct business for Count Dracula at his castle in Transylvania. Realising he’s trapped in Dracula’s castle, Jonathan soon uncovers the truth about the ancient vampire before Dracula escapes to London on a maniacal quest for love and blood.

“Playing the girl that is a little bit more sexually adventurous and is curious about pushing boundaries and not always playing by the rules – it’s a lot of fun.”

Staging a grand retelling of Dracula brings into question why storytellers in 2017 continue to return to Stoker’s classic text. I ask Querol, what is it about this novel that has long captivated us? “It hits all of the essential pressure points … it’s got sex, lust, bloodlust, love, revenge, passion – all of that delightful, meaty stuff that we don’t live in our regular day-to-day lives.” She elaborates, “that Victorian, gothic era fiction was about expressing the repressed undercurrents of sexuality or anger – all of these things that weren’t socially acceptable for people to express at all in polite society … and it is this underside of human personality that is still not widely, publicly spoken about. So, we like to be able to go to a space where we can experience things that we wouldn’t normally let ourselves experience.”

Discussing her career, Querol remarks that she tends to be typecast as the ‘good girl’. But as Lucy Westenra, the Whitby resident and Dracula’s first victim in the story, Querol finds a breath of fresh air in a more antagonistic role. “It felt like I had an opportunity to change a perspective of me,” she reflects. “Playing the girl that is a little bit more sexually adventurous and is curious about pushing boundaries and not always playing by the rules – it’s a lot of fun.”

Creating the illusion of a vampire on stage is no easy feat. For Querol, throwing herself into this supernatural role meant focusing on her movement. “I did research in terms of watching a variety of different kinds of horror film pieces, where there was possession … anything that showed the physical side of things. I think when you’re going to do vampires and transitioning from human into vampire, that is first and foremost a physical story to tell,” she explains. “It was something that I really wanted to be able to physicalise so that it would reach the back row of the theatre … it’s not like you have got the benefit of having a camera there to capture the torment behind the eyes.”

My interest is piqued by a press shot of the character Dracula wearing a leather jacket (the shot you see on this magazine’s cover). For an ‘honest’ adaptation, I have to ask about this. “The story of Dracula is that he starts off decrepitly old,” Querol begins. “And then, once he starts drinking some more blood and makes it to London, he becomes a much younger figure. What we wanted to get across was the change for Dracula as someone that can transcend time and become ‘the new modern’. Obviously the leather jacket is jumping a huge five or six generations, but we really wanted to highlight the difference between the Dracula that was at Transylvania and the one that appears in London,” she explains. “That kind of leather jacket has classic connotations of that James Dean, bad boy, rebel image. That’s something that we wanted to associate with Dracula as well … him being the kind of occult version of the bad boy. That’s sexy, and we wanted to give Dracula the opportunity to bring that out.”

Finally, Querol tells me about the response the production has received so far. “We had our first standing ovation in Dubbo, which was just so tremendous … It makes it feel like all of our hard work and dedication is paid off. Hearing the gasps and the moments of laughter, or fear, or shock – it’s really, really rewarding to know that you’re reaching people like that.”

Dracula is showing at Canberra Theatre Centre from Wed–Sat April 26–29. Tickets are $35 to $55 + bf via canberratheatrecentre.com.au.