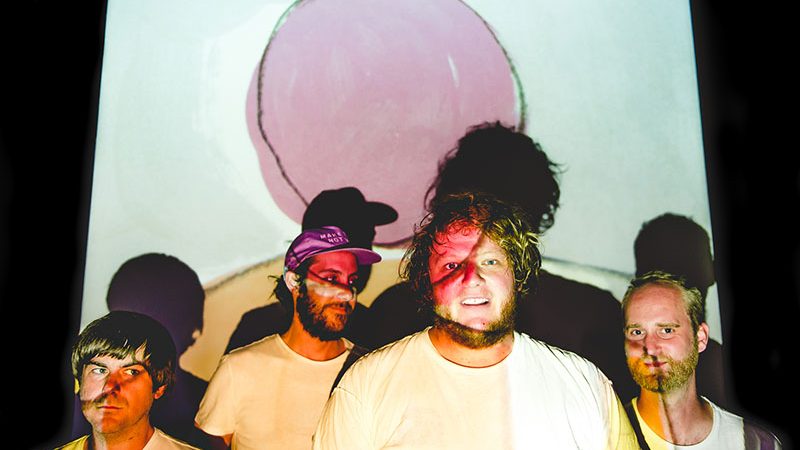 The closer you get to the heart of the Australian punk scene, the more obvious it is how much THE SMITH STREET BAND have done for it. The Smithies were born from front man Wil Wagner’s vision to add a hint of folk and pub rock to Australia’s underground punk culture. They weren’t the first to do it, but ask anyone who’s listened to their 2014 album Throw Me in the River and they’ll give you an earful about how it singlehandedly reinvigorated the Aussie punk train. Since then it’s been full steam ahead with nominations and awards across the board, 15 international tours and sold-out shows from London to New York.

From humble beginnings on a street in north Melbourne separating Fitzroy and Collingwood, the Smithies have now given us their fourth album, More Scared of You Than You Are of Me. Returning from recording in the US, BMA checked in with drummer Chris Cowburn ahead of the band’s regional tour with Groovin The Moo.

“This album has some of the best music that we’ve ever put together,” Cowburn tells me over the phone. “We’re still very proud of our last album, Throw Me in the River, but on this album, we’ve really found our voice.”

Arguably, it’s the band’s brutally honest voice that has got them to where they are now. Following up their massive third record with ‘Death To The Lads’ in 2016 only continued to solidify the Smithies for their deeply relatable songwriting. “This album is kind of a catharsis, particularly for Wil. He was going through a really rough, dark patch and this album helped him sort out a lot of things.”

“I wouldn’t change anything. You have to make your own path and make mistakes.”

Initially, The Smith Street Band started as a vehicle for lead singer Wil Wagner, but it quickly turned into more of a collaborative effort. Their original name, Wil Wagner & The Smith Street Band, was an allusion to Bruce Springsteen & The E Street Band, but it changed to reflect their move to a more unified musical experience. “We’ve all had a role in writing the songs and lyrics over the years, and it’s become a real collaborative process,” Cowburn says.

The Smithies have evolved and rearranged their line-up over the years. Keeping true to the punk scene, they’ve even become something of a champion for causes that matter to them, including refugee rights, gender equality and other sensitive issues. “A few years ago, we released a song in protest for refugee rights; it was one of our proudest moments.” Fans will vividly remember the song as ‘Wipe That Shit-Eating Grin Off Your Punchable Face’, a stab at then Prime Minister Tony Abbott for his ‘stop the boats’ policy and further inaction surrounding Australia’s ongoing refugee crisis.

Having played all over the country and internationally in Europe and further abroad, an Australian regional tour with Groovin The Moo will be a good opportunity for the Smithies to revisit the heart of their fan base. According to Cowburn, the band are happy to “play anywhere,” but one of his favourite places to play was at a small festival that they organised in Tasmania. “It was in a forest in rural Hobart, called ‘All Tomorrow’s Shoeys’. It was a small outdoor show for 250 people,” he explains. “We want to have that music festival grow and flourish and just get bigger and bigger. It would be great to have a festival someday with 5,000 people. That would be the dream.”

Like any band, the Smithies have had their ups and downs over the years. But as one of the original band members, Cowburn admits that it’s all been for the best. “If I could go back in time and change things, any of the things that I have done or as a band … I wouldn’t change anything. You have to make your own path and make mistakes,” he reflects. “But if I could go back and tell my past self some advice, I would say that the number one person that you have to please is yourself. You have to do what makes you happy and play for yourself.”

As for the budding singer-songwriter and avid muso in Australia’s punk scene, Cowburn has some advice for those just starting out. “I would say that you need to do things for the right reasons – do it for yourself and for your own self-expression. If you do things for the wrong reasons it’ll never work out, and don’t try to change yourself. Never shut yourself out. Do what makes you happy.”

It’s true that the Smithies didn’t enjoy widespread radio play until the release of their third record, Throw Me in the River. “The secret to success is that you have to work really, really hard. That’s what worked for us, and we did not expect to be famous overnight. We did so much touring all across Australia in so many places, and we learned so much from that,” Cowburn explains. “You have to wait and work for it, and then maybe you’ll have success … The band has been more popular and achieved more than my wildest dreams, well past my expectations.”

The Smith Street Band will be part of the line-up at Groovin The Moo, at the University of Canberra on Sunday May 7. Tickets are now sold out. For more information and sideshows, visit their website at thesmithstreetband.com.