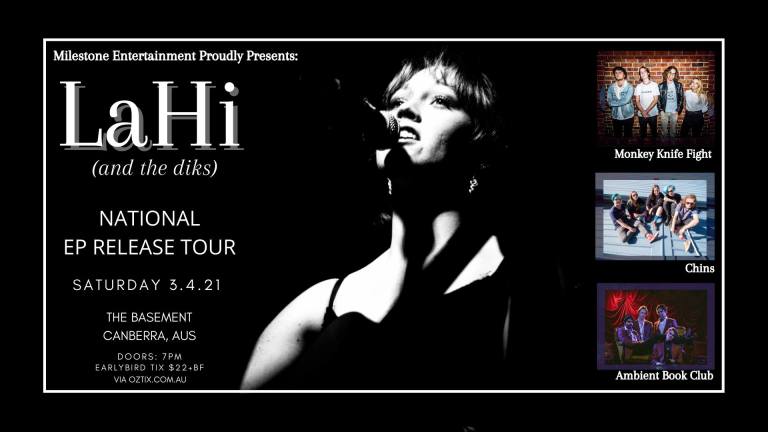 This will be a night to remember!

Don’t miss out on this one – come on out and support the reinvigoration of the live music scene… stand & drink… stand & dance… Live Music is Back with a Vengeance and all at Canberras’ Premier Live Music Venue – The Basement.

Headliners: LaHi (and the diks) are on their much-anticipated National EP Release Tour. Pre-sales available now or come check it out and decide for yourself!

Supported by none other than Ambient Book Club – check out their new single: “Dilemma”.
https://open.spotify.com/track/63jIWX5hoVseoSqk67LE2i&#8230;

Also on the Bill is Canberra’s own CHINS – also about to release their new single and one of Sydney’s hottest bands, Monkey Knife Fight.

As it’s Easter, the first forty groups through the door will score an ‘Easter’ Show Bag filled with Merch and a professional photographer will be on-hand to take photos of you and your group, as well as the VIP photos of you with the band of your choice!

Don’t miss out – grab your tix now (click here).
That’s 4 bands playing full sets and merch to take home to ensure that you have a night to remember.

More about the bands:

LaHi (and the diks)
A sparkly fusion of jazz, invigorated with a funky groove to get you moving, you will be captivated by the sheer presence of front person LaHi; her angelic voice, dynamic melodies, and an aura that demands attention even during the quietest of songs.

Her band “the diks” provide an ever-moving backbone that; with slapping baselines and intoxicating rhythms, provide electrifying bangers for any occasion.

Ambient Book Club
Since bursting onto the scene in 2019, Ambient Book Club have been captivating audiences with their mysterious soundscapes and visceral shows. Through an array of colourful guitars and vibrant rhythms, the band bring a modern take to psychedelic rock.

The band released their debut song ‘Road to Nowhere’ in January 2020 – a technicolour track that pays homage to classic psychedelia and invokes the nostalgia of warm summer nights. Since releasing the track, the band have been building a cult following and cutting their teeth on the Sydney club circuit.

Ambient Book Club’s sophomore release, Dilemma, demonstrates the band exploring new textures and finding new highs through experimentation. The 5-minute track seamlessly blends genres, sounds, and imagery to present a hauntingly surreal spin on their psychedelic sound. To kick off the new release and restart touring, the band played a sold-out headline show at The Factory theatre in Sydney. Now they are heading to Canberra!

Interspersed with covers from bands like “The Cure” and “Skeggs”, Chins have an array of originals – their energetic stage presence has resulted in the Chins’ shows being described by The Basement as “contagious!”

From belt along powerhouse anthems to upbeat bops to emotional bangers, these guys will have you bustin’ to boogie from your seat.

Tix available: General Admission and VIP. There are a limited number of VIP tickets available – your VIP ticket gives you the opportunity to have a professional photograph taken with the band of your choice!