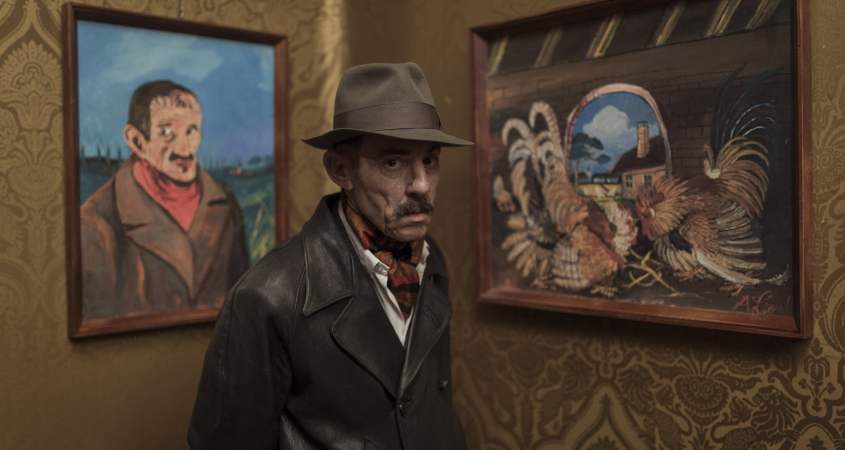 Hidden Away is a biographical drama about the life of Italian painter Antonio Ligabue.  Born in 1899, Ligabue was beset by physical ills resulting from malnutrition-induced rickets, which caused cranial and other deformities and stunted growth, and by mental illness resulting from parental and school cruelty and several episodes of punitive institutional psychiatric treatment.

Hidden Away concentrates mostly on Ligabue’s adult life (Elio Germano), although it is interwoven with telling flashbacks to his traumatic childhood as well as to a life of desperate, isolated poverty before his artistic talent was recognised in 1928 by Renato Marino Mazzacurati (Pietro Traldi).  Mazzacurati introduced Ligabue to oil paints, showed him how to use them, encouraged him to persist, and gave Ligabue somewhere to live and work, and Mazzacurati’s mother (Orietta Notari) cared for him with great kindness.

With Mazzacurati’s encouragement, Ligabue painted prodigiously in the following years, his works often depicting exotic animals as well as self-portraiture, and participated in art exhibitions and conferences through which he was slowly discovered and appreciated though he continued to suffer mentally and physically for the remainder of his life.

Excellent performances from Leonardo Carrozzo as the child Ligabue and Oliver Ewy as a youthful Ligabue beautifully complement the compelling performance by Elio Germano as the older Ligabue, a performance that richly and intensely brings to life Ligabue’s unique vision and uncompromising artistry as well as his physical and mental limitations.

Sombre cinematography and an equally sombre soundtrack reflect the depicted bleakness of Ligabue’s life, and makeup artists transformed the actors into the very distinctive-looking, disfigured artist.

Not an easy watch, but certainly a worthy one, Hidden Away is a remarkable portrayal of a man who, through no fault of his own, lived on the margins and from there left the world a rich artistic legacy.