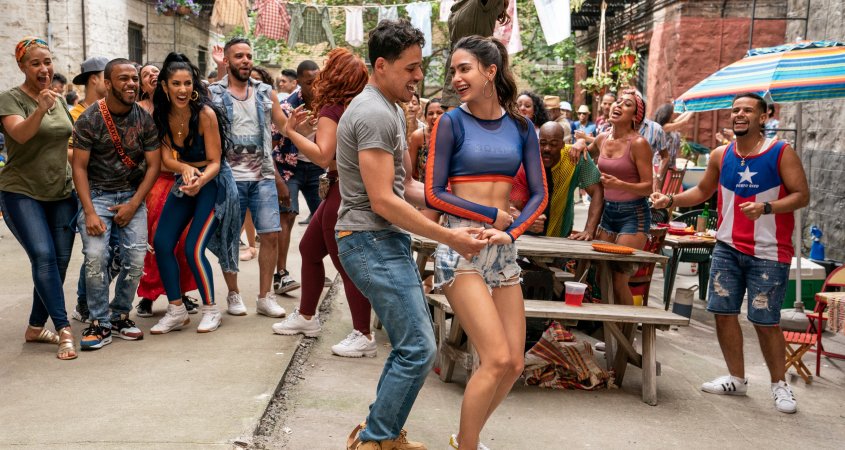 Washington Heights, a northerly Manhattan suburb, abutting Sugar Hill to the south and Little Dominican Republic to the north, largely houses Afro–Latino and immigrant Latino families.  Focusing on the latter, In the Heights follows the personal lives of four young people and their adoptive “grandmother”, Claudia (Olga Merediz).  Nina (Leslie Grace), facing a heroine’s welcome as she returns from having broken out as the first in the area to attend a prestigious university, feels a failure because she has just dropped out due to a combination of feeling isolated and invisible there and her concern for the tuition costs to her father, Kevin (Jimmy Smits).  Moreover, she feels lost because her ex-boyfriend, Benny (Corey Hawkins) split up with her but still works for her father.  From Benny’s perspective, though he pushed Nina off to university for her own sake, he continues to cherish her and dreams of success in business.  Young beautician Vanessa (Melissa Barrera) dreams of being able to open her own salon, and her beau, Usnavi (Anthony Ramos), dreams of closing up his grocery store to move back to his childhood home in the Dominican Republic; but his young cousin, Sonny (Gregory Diaz IV), whom he looks after, dreams of obtaining a work visa so that he can attend university.

In the Heights weaves these threads into a nearly seamless series of musical–dansical interactions influenced by Usnavi’s encouragement of the neighbourhood’s rappers, singers, and dancers — nearly everybody — to show the world that they dream large and in technicolour.

For anybody who loves a good vocal arrangement, the film is filled with rich, tight, driving harmonies on songs that set great lyrics to catchy melodies.  You may not quite be able to recall any of the songs after you leave the cinema, but you won’t be able to help but respond to their clever rhymes, highly danceable rhythms, and those harmonies that effortlessly give the songs a special additional magic.  The dancing too — chiefly latin steps along with breakdance and the kinds of choreography created specially for the big screen — is inventively choreographed and beautifully precise.  If you’re looking for a couple of hours of infectious joy, you can hardly go wrong with this one.