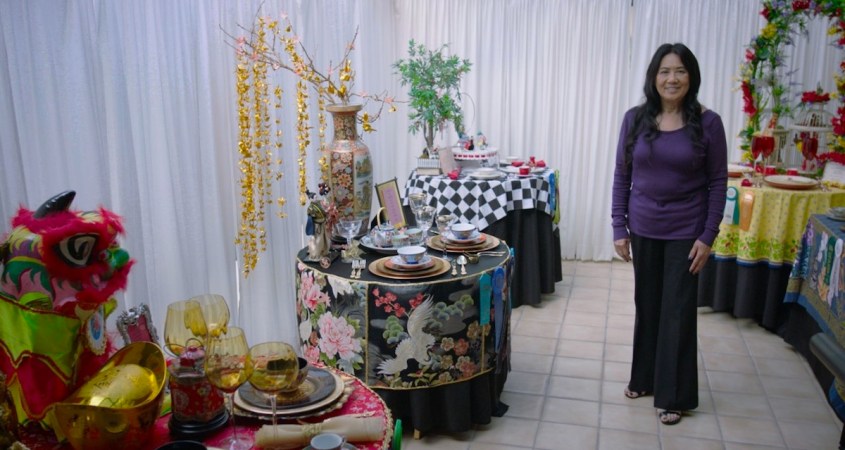 With broad-ranging experience in film and television, from camera work to production, editing, and directing, the filmmaker Scott Gawlik was well-placed to make a documentary as practically a one-man show.  Gawlik used cinematographer Jon Salmon as director of photography and shared the camera work with Skyler Rousselet, and set about tracking the preparations of seven favourites for “Best of Show” in the Californian Orange County’s annual table-setting competition.  The movie comes to a natural climax in the competition itself and a behind-the-scenes of the judging and the aftermath for the competitors.

Despite the frivolousness of its subject matter, which hints at comic opera, Set! is genuine documentary.  It uses captioning for little beyond names and relative dates, rather letting its subjects show what they are made of.  And you may be unsurprised to learn that Orange County’s table-setting champions are made of stern fluff.  They set their sights high, and some refuse even to acknowledge the limits of affordability in their quest to win glory.

Aside from what its characters show us of their entertaining preparations and anxieties for the contest, the insights that their preparations offer into their attitudes, motivations, relationships, and reactions speak volumes.  Overweening confidence, aggressive rivalry, egotism, and almost universal self-centredness may seem unlovely traits to highlight; but, in documenting the process of creating competitive table setttings, Set! shows us in miniature an entire culture, its values, and its effects on others.

Set!, the third (monthly) film screening in Stronger Than Fiction 2021, will screen again on Friday 16 July (6:45 p.m.) at Dendy at the Canberra Centre.