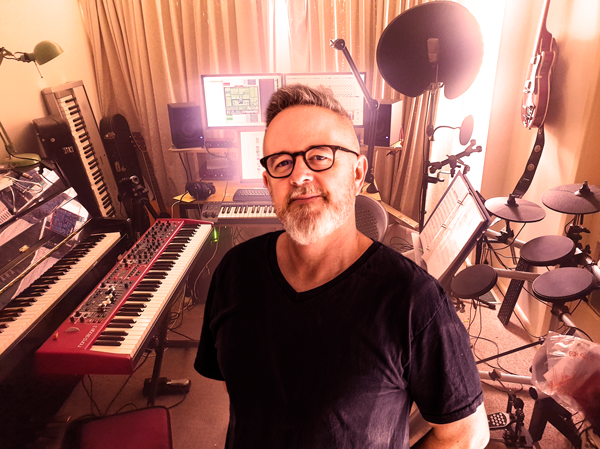 Andy Mison has just released his debut album Fergus Circuits. The multi-instrumentalist, singer and producer has been refining his skills for some time and this collection of songs is undoubtedly a culmination of this assiduousness.

From the opening track Bring Me Back To Life to the closer You Made Up My Mind, this album maintains a cohesive, consistent aesthetic and writing style. And there’s a good amount of quirk too, amid the layers of vocal, slabs of synth and melodic vigour.

Bring Me Back To Life seems to set the tone and temperament, a tendency for adopting synth sounds impregnated with a robust, friendly kind of menace, rippling bass parts, and rhythm programming efficiently aligned to the cause, which is a curious hybrid of funk-tinged, electro-pop.

As we delve deeper into the album, we get more accustomed to the meticulously applied sound and vocal choices, and, of course, the overall patina of the melodies, which swing from outright big hooks to the more subtle groove induced kinds, such as in Sell It To Me Slowly.

The majority of the tracks are bright, high-spirited, with some variances in feel that make up for the less common heterogeneous nature of sonic scope. Utilising tracks like Indigo Child, which features a chilled-out drum pattern providing a change in dynamics, works, with the listener coerced into taking in the various textures without the album’s prevailing fusillade.

Perhaps the stand-out feature of Fergus Circuits is the songwriting. Despite the obvious performing, recording, and programming skills on display—in fact, in some cases, despite them—these tracks, for the most part, stack up melodically. Mison knows his way around a song and in some cases cogently blends styles that have surprisingly charming results, such as in As Long As We Live, which adopts indie ’80s aesthetics and paints them over with a ’60s flavoured melody and chord structure, all the while maintaining the album’s dominant palette.

If you like your electro-pop imbued with a smattering of funk, the odd jazz chord inversion and a considered melodic bent, then Fergus Circuits is worth a listen.