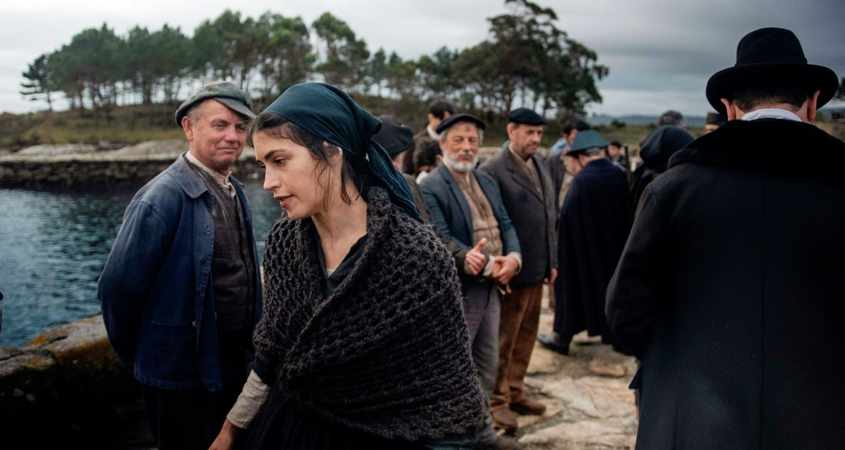 The Island of Lies is a telling of the true story of the shipwreck of the passenger steamship, the Santa Isabel, on the rocks of Sálvora Island, off the coast of mainland Galicia, Spain, in 1921.  At the time, the people of Sálvora eked out a living under the dominion of the civil parish of Carreira.

The poverty and gruelling lives of the people of Sálvora in 1921; their lack of education; the unfair demands of their rich overlords; and the enforcement of those demands by the island’s cruel overseer set the scene in the opening sequences of The Island of Lies for the tragedy to come.

The people are hard and silent, knowing the price of speaking out against the injustices they are subject to.  All submit, except fierce and indomitable María (Nerea Barros), which makes her something of an outcast amongst those who fear the repercussions of her insubordination.

On the night of 2 January 1921, a massive storm hits, and the steamship Santa Isabel, on its way to Buenos Aires, runs aground on the island’s outer rocks.  The island’s people gather on the beach to pray for the souls they hear calling for help, as the conditions almost certainly doom any rescue attempt, especially as most of the island’s men are on the mainland.  But María is determined to help.  She and two other women, Josefa (Victoria Teijeiro) and Cipriana (Ana Oca), row a skiff to the wreck to save as many as possible.  Their successful rescue of some of the passengers and crew has them hailed as heroines.

Accompanying the officials to the island to investigate the shipwreck is León (Darío Grandinetti), an Argentinean journalist, who, sensing that something untoward has occurred, is reluctant to accept what appears to be a straightforward tragedy.  When he determines to find out, uncomfortable truths emerge.

This gripping story is played out with tremendous veracity by all the actors, especially Nerea Barros, whose María is unforgettable.  Stunning cinematography of the harsh coastline of the island, its largely barren landscape, and its wild seas is beautifully juxtaposed against the soft luxury of the elite on the mainland, a stark reminder of the wealth that the island’s poor toil to provide to the rich.

The Island of Lies is far more than a mystery.  It’s an exploration of life’s greys and a reminder that, in life, things are often not what they seem.