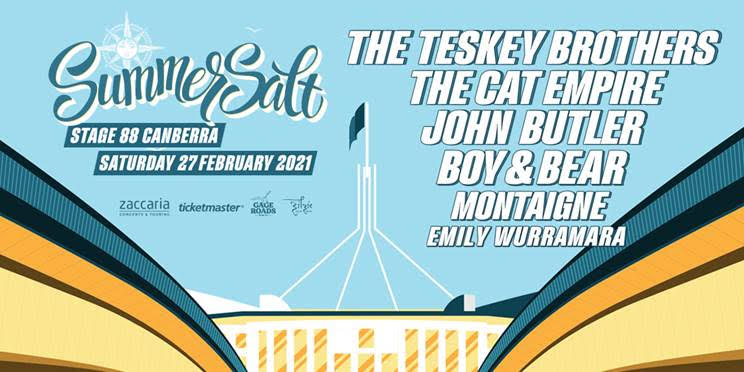 Following the huge success of the SummerSalt concert series across Australia over past Summer seasons, Zaccaria Concerts & Touring are thrilled to announce the next SummerSalt concert event for Canberrans at iconic outdoor venue, Stage 88.

The stellar line up is touted as one of the best to date featuring: THE TESKEY BROTHERS, THE CAT EMPIRE, JOHN BUTLER, BOY & BEAR, MONTAIGNE & EMILY WURRAMARA.

2020 Grammy nominees The Teskey Brothers have come a very long way in a very short time. The four Melbourne mates have seen a meteoric rise in popularity in the past 12 months, amassing a legion of fans all around the world with their soulful recordings and captivating live shows. The band’s latest studio record Run Home Slow has been a global hit with elements of soul, blues, southern rock, Americana, psychedelia, and gospel, and the striking single So Caught Up which won the AAA category of the International Songwriting Competition and landed the band TV appearances in USA, Australia, New Zealand and Germany.

Onstage, The Teskey Brothers conjure a rare, soulful energy and raw emotion. Josh Teskey’s stunning voice defies belief as the band, including horn section and organ, ignites around him. They have been crowd favourites at Latitude, Fuji Rock, North Sea Jazz, Love Supreme, Citadel, Bonnaroo and many more, not to mention selling out pretty much all of their own headline shows. 2020’s live album Live at The Forum debuted at number 1 on the Australian album chart and has been described by American Songwriter magazine as, “a near perfect live recording”.

Celebrated as one of the world’s best festival bands, The Cat Empire delivers a spectacular live show, legendary for making their vast global audience dance. Expect The Cat Empire’s genre-embracing anthems, high-energy performance, and joyful sounds to elevate your post-COVID (fingers firmly crossed, there) spirits, providing the perfect toe-tappin’ soundtrack to an uplifting night under the stars.

Says roustabout Felix Riebl: “By the time we step on to the SummerSalt stage, it will have been 12 months since we have been on tour, so you cannot imagine how excited we are to play live again with this brilliant line-up of artists.”

John Butler has an impressive one million album sales to his name, remains one of the most successful independent artists in Australia’s history, has been the No. 1 most played artist on Australian radio, and has numerous ARIA awards to write home about.

The latest release of their seventh studio album HOME debuted at #1 on the ARIA Charts. John Butler & his Trio have cemented an earnest reputation as one of the best live blues and roots acts doing the rounds. John Butler will bring his scintillating solo performance to the SummerSalt stage.

2019 saw Boy & Bear’s triumphant return to the international touring circuit to promote the release of their album Suck on Light which was rated by triple j’s Richard Kingsmill in his top 10 albums of the year. An acoustic album of some of their favourite tracks followed in September 2020, with the band returning to the studio to write more music and work on new creative pursuits they have in the pipeline.

Celebrated for their unique sound, rich harmonies, and trademark warmth and charisma, Boy & Bear take to stages around Australia late summer delivering the musicianship and connection that their live audiences have come to love throughout their career.

“We cannot wait to be playing together again, alongside other great Australian live bands, in what will be the biggest outdoor Australian tour this summer,” says Dave Hosking.

The voice of the new generation, Sydney based artist Montaigne (born Jess Cerro) at only 24 has become a major name in Aussie indie music. The past few years have seen her recognised for her work with multiple spots on the triple j’s Hottest 100, an ARIA award for Best Breakthrough Artist and a further nomination for Best Female Artist in 2016, plus J-Award nominations. Her debut album Glorious Heights (produced by Tony Buchen) hit the charts at #4 and her sophomore album COMPLEX was released in 2019 to rave reviews.

Montaigne has played notable festivals like Splendour in the Grass, Lost Paradise, Woodford Folk Festival, Groovin the Moo, Party in the Paddock, Field Day and WOMADelaide. Having opened for international acts like Cindy Lauper and Blondie, this young performer continues to garner high praise for her stunning live presence. Having taken out the Eurovision: Australia Decides 2020 competition with her single Don’t Break Me, Montaigne will represent Australia on the world stage at Rotterdam in May of 2021.

Emily Wurramara is a talented singer-songwriter from Groote Eylandt, an island off the coast of Australia’s Northern Territory, who is now based in Tasmania. Through her music, she shares stories of country, family and culture sung in English and her traditional language Anindilyakwa.

Her debut album Milyakburra is steeped in the sand, salt and concrete of her family, community, islands, and all of the souls that have played a part in her journey so far. Milyakburra, released on Wantok Musik, was critically acclaimed and played widely on triple j & ABC radio amongst others. The album ​was nominated for the 2018 ARIA Award for Best Blues and Roots Album and received four 2019 Queensland Music Award Nominations. The album also won the Best Blues and Roots Album of the Year at the 2019 AIR Awards.

Emily is in high demand to perform in Australia and internationally.  Her new single, Cruising to be released this summer, with her Sophomore album due out in 2021.