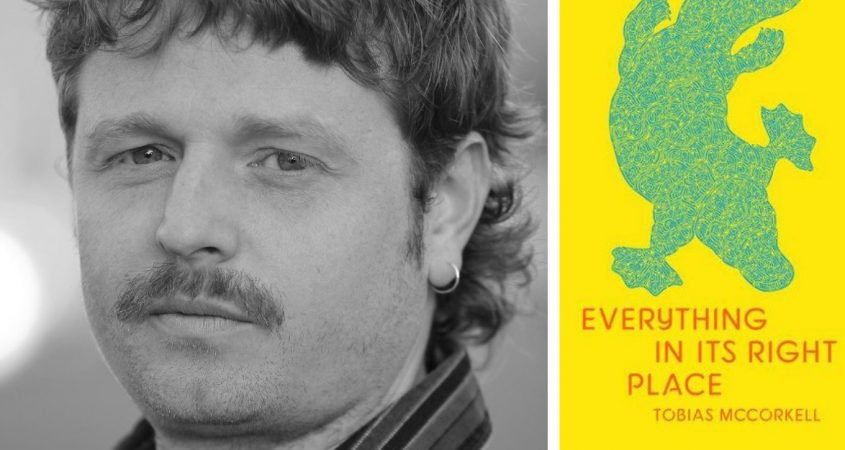 Melbourne author Tobias McCorkell spent the first 25 years of his life in Coburg. He has taught creative writing at the University of Melbourne and authored works of non-fiction including editing the upcoming Cop This Lot: writers on growing up class-conscious in Australia, an anthology of essays.

In 2018 he appeared at the Melbourne Emerging Writers’ Festival. And he is the recipient of a 2019 Varuna Residency Fellowship.

Everything In Its Right Place is his debut novel, and what a novel it is. Ford McCullen is the protagonist of this gritty and humorous coming-of-age story set in Coburg, Melbourne. He lives with his mother Deidre and his Pop and Noonie in ‘The Compound’, a pair of units under the shadowy gaze of Pentridge prison. Ford’s father Robert has left them to live in regional Victoria with his new male partner.

Everything, seemingly, is not quite in its right place; and this is only part of the allure of this ebullient and affecting rite of passage narrative.

The reader is drawn into Ford’s world from the opening lines as if about to hear a licentious yet affectionate confessional.

And then we are soon transported by this violin-playing, street-savvy adolescent whose wide-ranging social tentacles keep him immersed in one area of his life while seduced by another.

As a result of his paternal grandmother, Queenie, and her good fortune, Ford attends a Catholic private school in a more affluent part of the Melbourne. And this is where Ford’s balancing act begins. He wants to fit in, and he can and does, but there is also another side; a self-sabotaging kind. Ford is a dutiful teen torn between loyalties, expectations and the deepening of his consciousness in a multi-layered society.

Amid the pressure of realising he may just be the only adult in the place, Ford sets forth on his inner expedition while attempting to understand events in his father’s own life, his mother’s dilemmas, and the ever-present sociological totems of football and religion.

The novel takes on the themes of family, sexuality, class and adolescence with empathy and vitality, deliberating on these motifs with protean humour, acute insight and evocative language. In the tradition of Christos Tsiolkas’ Loaded and Helen Garner’s Monkey Grip, Everything In Its Right Place is a captivating and exhilarating reading experience.