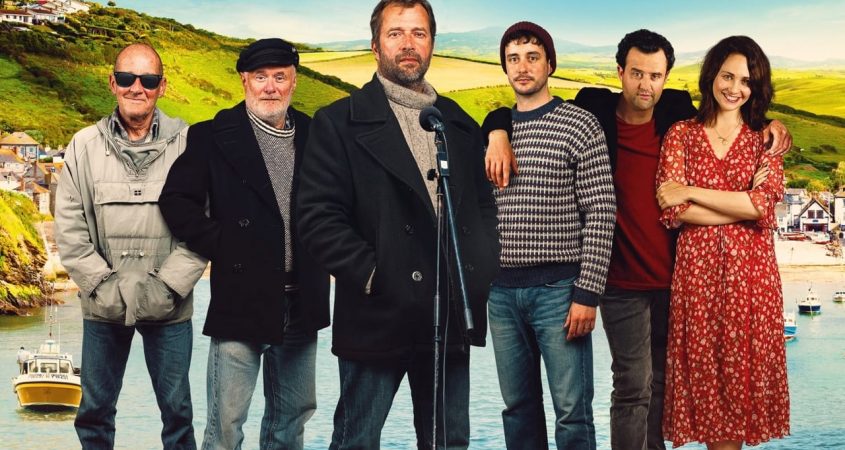 Fisherman’s Friends is based on a true story about a group of Cornish fishermen whose shared histories and love of sea shanties have given them a tradition of singing together for generations.

A top music executive, Danny (Danny Mays), finds himself in the vicinity of a group of singing fishermen when he joins his friends for a stag weekend in Port Isaac. Danny ends up doing whatever it takes to sign the group for a record deal, but along the way discovers the meaning of true friendship, loyalty, and value in life.

Fans of the TV show Doc Martin will enjoy the familiar surrounds of Port Issac, where Fisherman’s Friends was filmed, and which is the actual home of the now-famous singing group.

Admittedly formulaic, Fisherman’s Friends is nonetheless tremendously enjoyable and heart-warming, and the singing is great, and, at times, quite moving. The scenery around Port Isaac is stunningly beautiful, and the cinematography does it proud, especially in the way in which it juxtaposes the port’s wild beauty with the crowded concrete and steel of the London landscape.

Many in the film’s cast will be familiar to audiences, who will certainly appreciate how well these actors have mastered the Cornish accent, and how convincing they are as people who have lived in the same small village all their lives and want nothing more than to keep their traditions alive and the wolves from the door.

With its toe-tapping soundtrack and everything coming more-or-less right in the end, Fisherman’s Friends offers a couple of hours’ engagement in a satisfying musical tale.