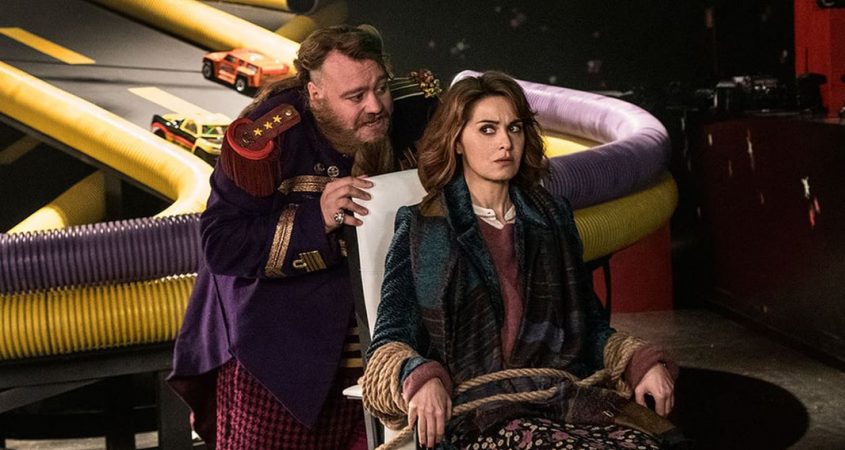 For five centuries, Santa’s greatest competitor in fulfilling children’s Christmas wishes has been the Christmas Witch, the long-nosed “hag” la Befana (Paola Cortellesi), who during the day is the schoolteacher Paola. Paola loves both her jobs, and fortunately, present-day Christmas wishes for complex technical toys present no special challenge to her.

But falling foul, one night, of a gift recipient’s diligent guard dog leads la Befana to a late gift delivery to Johnny — who never forgives her.

Twenty-five years later, “Mister” Johnny kidnaps the Christmas Witch, demanding that she give him the request letters she has received from children in order that he can replace her in their affections by fulfilling their Christmas wishes.

But Mister Johnny hasn’t reckoned on the courage, resourcefulness, or ability to cooperate of six of Paola’s students, including even the school bully. Discovering Paola’s Christmas Witch lair, figuring out her secret, and swearing to protect it, her students set off in rescue.

Of course, it’s an adventure and a half: the children must deal not only with “Mister” Johnny but also with his sidekicks and the nasty surprises he keeps for unwanted visitors. But the good are very likeable indeed; the bad are awfully bad but not too scary and get their comeuppance; and the merely misguided are redeemable. All in all, this beautifully cinematic take on an ancient Christmas myth will warm the hearts of all children, from seven up to and including anyone’s grandmother.