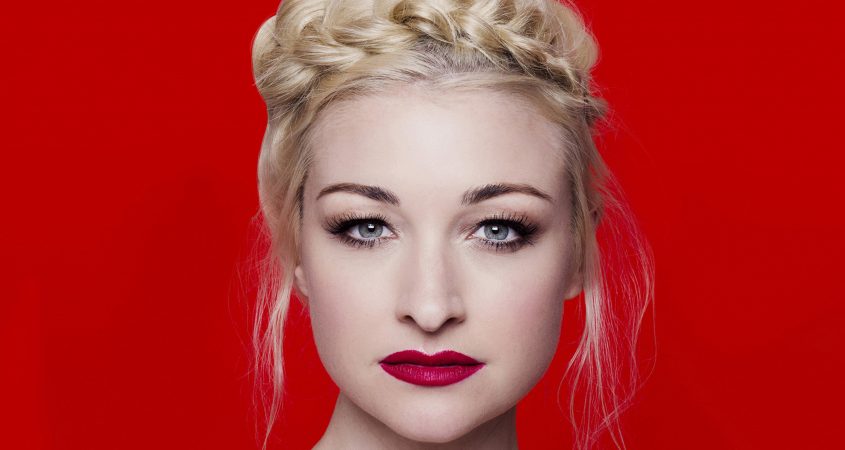 The first time I heard the magnificent dulcet tones of Kate Miller-Heidke was back in 2005 at the Woodford Folk Festival. Her soft yet beautifully controlled vocal stylings in her well-crafted, and often comical, pop tunes instantly made me a fan.

Then she performed a cover of Psycho Killer by The Talking Heads and holy effing hell! That voice. I knew that this wasn’t just another flash-in-the-pan act, and was sure this would not be the last time I would hear her name.

Fast-forward 14 years and Kate Miller-Heidke has gone on to lead a rich, varied, and successful career that most singer-songwriters only dream of.

In just this last year she’s written the score for the musical version of Muriel’s Wedding and represented Australia in the Eurovision Song Contest.

I recently chatted with the mega-star about her experiences.

“Eurovision was amazing. It was also incredibly intense and scary for lots of different reasons. I guess, at the time, it was so crazy that I couldn’t quite enjoy it,”
admitted the singer.

“Whereas with Muriel’s Wedding, I got to sit in the audience and watch other people bring this work to life, and that was just an incredible thrill. I’ve never experienced that kind of buzz before without being onstage myself. I do feel really lucky and grateful that I’ve had such a lolly-bag of different projects to sink my teeth into. I feel very stimulated and challenged.”

As many will know, the song Kate performed at Eurovision, Zero
Gravity, is about her struggle with post-natal depression after the birth of her son, Ernie. When asked about whether it was a conscious choice to publicly share these details about her private life, Kate said:

“The song came before the decision to share those personal details. I’ve always been quite a private person.

“The song came out, and after that I just felt compelled to tell people what it was about. And, I guess, I also had experienced the power and the release of other people talking about their feelings of depression. And that’s something that’s helped me, actually; just realising that I wasn’t as alone as I felt at the time.”

I asked Kate about the challenges of having a small child and being a creative professional. Most artists and creative-types, Kate included, need to find a state of “flow” to do their best work. For any artists in a similar situation, Kate says:

However, she says that for her and her husband Keir Nuttal (who is also her longtime musical collaborator) having Ernie has forced them both to be more efficient with their time.

“I’ve only got a certain amount of time to do the work,” she says. “But it is difficult. Your heart is kinda divided between your passion for your work and this new, all-consuming love”.

Kate knew early on that making people both laugh and cry was, for her, the sign of a good musician, and if she could, “do that for people then she’d definitely won”. After years of attending the Woodford Folk Festival herself as a kid, she learned the power of the novelty song. This for me is another thing that sets Kate Miller-Heidke apart. Her quirk and sense-of-humour comes through in many of her tunes but she admits they only really work live.

“From the start those kind of songs often seemed to hit their mark, [but] not so much on recordings. I think that’s what’s so special about them; they just exist in a live show so you have to come and see it to experience them.”

Kate is currently in “deep writing mode and pre-production mode for a new album. And part of this tour is going to be sneak previews of the new material”.

Audiences can expect to hear many old favourites of Kate’s, but also she’s keen to see which new songs resonate.

Tickets are on sale now for her show on Thursday 26th September at the Canberra Theatre. To book go to canberratheatrecentre.com.au or call 6275 2700.